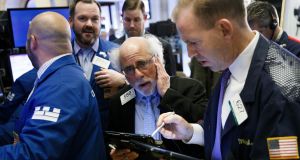 World shares have rallied at the start of 2018 on optimism for continued strong global growth and improving corporate earnings, with many analysts expecting the bull run in equities to lengthen.

The weaker US currency has been affecting several Irish companies with big operations in the US. Packaging giant Smurfit Kappa, meanwhile, was up 1 per cent at €29.23 amid a upward swing in prices across Europe.

Recent Iseq entrant Glenveagh put in another good session rising 1.2 per cent to €1.25. Share in the property company are now up 6 per cent since the start of the year.

UK shares edged down as a flurry of corporate news triggered sharp moves, including for contractor Interserve after the Financial Times reported the British government was monitoring it following the collapse of competitor Carillion.

Within small market capitalisations, Interserve saw its shares tumble around 15 per cent at the open then gradually recoup most of its losses, closing 0.4 per cent lower.

Shares in luxury brand Burberry were the biggest fallers on the FTSE, losing more than 9 per cent after reporting a 2 per cent drop in retail revenue for the Christmas quarter.

“Following better than expected sales for the December quarter from Richemont and Hugo Boss, Burberry’s retail performance in Q3 may be seen as a bit disappointing,” said RBC Europe analyst Rogerio Fujimori, who has an “underperform” rating on the stock.

Pearson also sustained heavy losses, down 4.6 per cent after saying it planned to cut staff and sell assets in a bid to eke out underlying growth in 2018, while its North American business continued to weigh on performance.

Provident Financial posted another session of losses after Tuesday’s 13 per cent fall, down a further 13 per cent on the day. Broker Liberum cut its price target on the stock and said the risks were still too great to consider owning the stock.

Casino shares were down 5.9 per cent , sharply underperforming the European retail sector and dragging down shares in its domestic rival Carrefour. Casino shares rose around 10 per cent in 2017.

Swiss food group Nestle rose marginally after announcing that it had agreed to sell its US business to Ferrero for $2.8 billion.

Wall Street’s main indexes rose on Wednesday, led by gains in technology and industrial stocks, but losses in Goldman Sachs and Bank of America dragged down bank shares.

Goldman Sachs fell about 3 per cent after posting its first quarterly loss in six years on tax-related charges, while its trading business took a hit as volatility remained at historically low levels.

BofA shares fell 2.6 per cent after the second-biggest US lender reported profit that nearly halved as it booked a $2.9 billion charge due to the new federal tax law.

“You saw a lot of earnings estimates increase coming into earnings season, certainly after tax cuts. So one has to wonder if a lot of that optimism has been baked in,” said Marcelle Daher, co-head of North American asset allocation at John Hancock Financial Services in Boston.

Boeing rose 2.6 per cent after the company announced a joint venture with car seating leader Adient to make aircraft seats. IBM rose 2.5 per cent after Barclays analysts double upgraded the stock to “overweight” and hiked its price target by $59 to $192.

IBM, along with Microsoft’s 1.57 per cent gain and Intel’s 2.6 per cent rise, lifted the S&P technology index by 0.6 per cent. Apple’s 0.4 per cent fall was a drag on the sector after Longbow Research downgraded its stock to “neutral”, citing a “good, not great iPhone cycle”. – Additional reporting: Reuters/Bloomberg