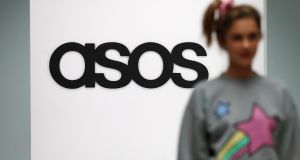 Online clothes retailer Asos plunged 23.19 per cent, wiping more than £500 million sterling off its value, after the company warned that profits would slump this year. Photograph: Reuters

Ryanair shares fell after rival EasyJet confirmed that it was hiring the Irish carrier’s outgoing chief operating officer, Peter Bellew, and it emerged that the British Airline Pilots’ Association was balloting members employed by the Irish company for industrial action. Ryanair stock closed 3.28 per cent down at €10.16 after hitting a low of €10.12 in the final hour of trade.

Investors swerved house builders Cairn Homes and Glenveagh Properties despite a report showing that they were responsible for much of the growth in house sales in the Republic in recent months.

Insulation specialist Kingspan shed 1.02 per cent to €46.74 on a day when builders’ merchants and materials manufacturers performed poorly.

Paddy Power owner Flutter Entertainment dipped 0.26 per cent to €76.62. Dealers remarked that it had held on to much of the gains it made when the stock surged 12 per cent on rumours that a private equity player was planning to buy the €6 billion betting giant.

Online clothes retailer Asos plunged 23.19 per cent, wiping more than £500 million (€556 million) sterling off its value, after the company warned that profits would slump this year. Its stock closed at 2107 pence sterling in London on Thursday, a new 12-month low for the shares, which have lost more than 60 per cent of their value over the last year.

Irish-based builders’ merchant and DIY group, Grafton, owner of the Woodies’chain, fell almost 1 per cent to 749.5p on renewed concerns about the impact of Brexit on the UK economy. The group has a substantial British business and is listed only on the London market.

Airline EasyJet, a key Ryanair rival, climbed 4 per cent after confirming that it had poached Mr Bellew, and predicting that profits in its full financial year could between £400 million (€445 million) and £440 million (€489 million).

Reach, the owner of the Mirror, Express and Star national newspaper titles and owner of 50 per cent of the Irish Daily Star, confirmed it was in talks to buy parts of rival JPI Media, which owns The I and several regional titles. Its shares fell 1.5 per cent to 79.8p.

Shares in SAP, Europe’s most valuable tech company fell 5.6 per cent to €113.32 after it said investors would have to wait till next year for a major improvement in margins as the business software group reported a 21 per cent fall in quarterly operating profit. That drove Germany’s DAX to a one-month low, while technology stocks dropped 1.5 per cent.

Cement-maker and CRH rival, Saint Gobain, fell 0.64 per cent to €34.15 on poor sentiment towards its industry.

Wall Street’s main indices looked set for their third day of losses on Thursday, as Netflix reported a surprise fall in US subscribers in a downbeat start to results from high-growth companies.

Shares of the streaming pioneer tumbled 11.1 per cent to their lowest since late-January at $321.84, as the company also missed targets for new subscribers overseas at a time when it has staked its future on global expansion.