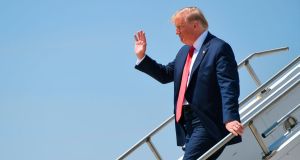 Markets ended the week on a cautious note, with European shares a mixed bag and the FTSE notching up its seventh day in the red.

Disappointing data from China offset comments from the Bank of England earlier in the week that British banks were able to withstand a no-deal Brexit, while talk of an interest rate cut in the US buoyed markets.

The Irish index of shares ended the day marginally higher, gaining 19 points to close at 6,295, bucking the general European trend.

There was little news throughout the day to shift stocks, with Ryanair losing almost 0.4 per cent to close the session at €10.15. Traders said it was a reaction to the previous day’s news that it may be forced to close bases due in part to a delay in the delivery of the new Boeing 737 Max that could cut its winter fleet.

Kingspan saw its stock gain back some of the losses it had sustained in recent days, with pressure easing on the shares. It ended the day at €45.78, almost 1 per cent higher.

The FTSE 100 saw its seventh day in the red on Friday, its longest losing streak since 2015, led lower by losses in pharmaceuticals after the US White House scrapped a rebate rule, while the mid-cap bourse jumped on prospects of lower interest rates. The UK’s blue-chip index edged 0.1 per cent lower after trading in positive territory for most of the session as its more internationally-exposed constituents such as miners climbed on hopes of an interest rate cut by the US Federal Reserve.

The mid-cap FTSE 250, however, saw a 0.6 per cent rise as a Bank of England official said that the BoE might need to cut interest rates almost to zero after a no-deal Brexit.

The BoE comments helped cap losses on the main index as well, with blue-chip housebuilders Persimmon and Barratt rising on rate cut hopes. Pharmaceutical heavyweights AstraZeneca and GlaxoSmithKline were among the biggest drags on the main index, tracking shares in their US peers after the Trump administration pulled the rebate rule.

Exporter stocks such as spirits company Diageo also weakened along with the dollar, which has been pressured by growing bets that the Fed would cut interest rates at a policy meeting later this month.

Government bonds extended declines in Europe, heading for the worst week since at least October, after industrial output data for the euro region beat expectations.

The single currency fluctuated. The rally in risk assets is continuing to benefit from Federal Reserve chairman Jerome Powell’s dovish comments this week, even after strong US consumer inflation data on Thursday offered a potential complication to policy-makers when they set rates at the end of the month.

US stocks edged higher and the dollar fell as hopes rose for an imminent interest rate cut, while oil futures were little changed as supply worries triggered by a tropical storm were offset by signs of a global surplus for several months.

“We’re coasting along with the wind at our back right now after Powell’s testimony this week which points toward a rate cut in July,” said Michael Antonelli, market strategist at Robert W Baird in Milwaukee.