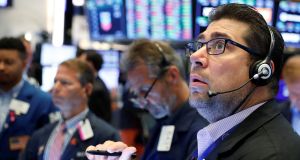 The Chinese data eased investor concerns about a slowdown in global growth, lifting trade-sensitive German stocks, while the improvement in sentiment also brought an end to the London market’s longest losing streak in 3½ years.

The Iseq climbed 0.4 per cent, as Flutter Entertainment led the charge for the European bookmaking sector. The Paddy Power owner saw its stock rise almost 3.7 per cent on the Dublin market to €77.76, after the sector was buoyed by some positive US gaming trends data. Flutter has fallen back since its share price surged on takeover speculation two weeks ago, but enjoyed positive momentum in Monday’s market.

Building materials group CRH underperformed, declining 0.8 per cent to €29.51. After the close of markets Blackstone was reported by Bloomberg to be near a deal to buy CRH’s European distribution arm.

After seven sessions of losses, the FTSE 100 rose 0.3 per cent, with Antofagasta surging after a favourable arbitration verdict.

The mining stock jumped 4 per cent after a tribunal ordered Pakistan to pay damages of $5.8 billion to Tethyan Copper, a joint venture between the company and Barrick Gold, in a dispute over a copper mine.

Micro Focus skidded nearly 6 per cent after a filing showed executive chairman Kevin Loosemore had sold about £11.6 million worth of its shares.

Persimmon was down 3 per cent amid reports that a television investigation was set to reveal concerns about the quality of its properties and customer service.

Sports Direct slumped 10 per cent on its worst day this year after it delayed preliminary results, citing problems integrating its House of Fraser business and increased scrutiny of its accounts that could affect guidance.

The pan-European Stoxx 600 rose 0.4 per cent in a choppy session. In Germany, the Dax increased 0.5 per cent, while the French Cac rose 0.1 per cent.

Frankfurt-listed shares had briefly dipped into the red in early trade after Germany’s economy ministry pointed to weakness in the manufacturing and services sectors, suggesting a subdued second quarter for Europe’s largest economy.

Anticipation that the European Central Bank might signal further easing in monetary policy next week lifted the mood.

Chipmakers gained after a senior US official said the US may approve licences for companies to restart new sales to blacklisted Chinese telecoms equipment maker Huawei. Infineon, ASM and STMicroelectronics rose between 0.6 per cent and 3.7 per cent.

Shares of Belgian-Dutch biotech firm Galapagos jumped 19 per cent to a record high after US drugmaker Gilead Sciences Inc said it would invest $5.1 billion in the company.

Wall Street’s three main indexes flitted between slight gains and losses on Monday, as declines in Boeing and bank stocks after Citigroup’s quarterly report were countered by a rise in technology shares.

The third-largest US lender beat profit estimates but reported a decline in interest margins, with its shares marginally lower in volatile early trading.

JPMorgan Chase, Goldman Sachs and Wells Fargo slipped ahead of their earnings reports, due for release on Tuesday.

Symantec tumbled 13.2 per cent after a report that the cybersecurity company and chipmaker Broadcom have ceased deal talks. Broadcom rose 1.6 per cent.

Boeing shares fell 1.1 per cent on a report that the 737 Max aircraft may stay grounded until early 2020.