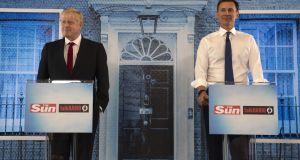 The pound sank to a six-month low against the euro on Tuesday after a debate between the two candidates vying to be Britain’s next prime minister re-ignited worries about a no-deal Brexit.

Both frontrunner Boris Johnson and his rival Jeremy Hunt said late on Monday that they would not be willing to accept the backstop element of Theresa May’s Brexit deal, which is one of Brussels’ principal demands in Brexit negotiations.

The backstop is an insurance policy designed to prevent the return of a hard border between the Republic and Northern Ireland.

Brexit jitters, coupled with recent poor British economic data, have been keeping sterling subdued and near its lowest levels in years.