The ECB joined peers in Japan, Australia and the US in launching a fresh wave of emergency stimulus 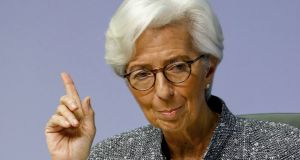 A tentative rally of Irish and European shares on the back of more stimulus measures from European Central Bank (ECB) has fizzled out.

But the hope that co-ordinated measures by global financial authorities could halt the coronavirus sell-off were short-lived with European shares on the slide again by mid morning.

US stock markets were also expected to open lower with the S&P 500 on course to sink close to three-year lows. Investors again sold travel and leisure stocks furiously. Irish banks were again hard hit with AIB down nearly 13 per cent and Bank of Ireland down 6 per cent, even though sector players hope that payment holidays on offer to borrowers affected by Covid-19 will not lead to loans ultimately going into default.

The Irish benchmark of shares is now over 40 per cent lower for the year to date.

Shares in Europe had initially been buoyed after the ECB promised €750 billion in asset purchases to support markets.

Frankfurt joined peers in Japan, Australia and the United States in launching a fresh wave of emergency stimulus to help businesses battered by a near halt in economic activity from the coronavirus pandemic.

The US Federal Reserve said it was launching a programme to support money-market mutual funds.

“We are seeing how central banks and governments are making an effort to translate the ‘whatever it takes’ sentence into real measures with effective and convincing steps,” said Juan Luis Garcia Alejo, general director of Andbank Wealth Management Spain. “For investors it’s key that markets stabilize and we get better visibility.”

Although banking and oil and gas stocks rose in early trading across Europe, travel and leisure firms fell on growing concerns of a complete collapse of the sector.

Germany’s Lufthansa said the airline industry may not survive without state aid if the virus outbreak lasted for a long time.

American Airlines secured another $1 billion in bank credit to help its fight against the crisis, but still saw its shares fall another 4 per cent in response. The airlines index is down nearly 60 per cnet this quarter as major cities around the globe enter a virtual lockdown, emptying hotels and airports and forcing automakers to shutter plants. Hotel operator Marriott International and Darden Restaurants both dropped more than 10 per cent in premarket after pulling their 2020 financial outlook.

Fears of a prolonged recession have been taking hold, leading investors to shift to cash in hopes of better days to come. Even prices for investments seen as very safe have been falling as investors rush to raise cash.

Oil prices bounced nearly 7 per cent on Thursday after a three-day selloff drove them to their lowest in almost two decades as demand plummeted due to the coronavirus and supplies surged in a fight for market share between Russia and Saudi Arabia.

Futures rose as much as 18 per cent in New York, the most since December 2008, following a 24 per cent rout in the previous session. Oil has been hammered by the dual shocks of collapsing demand and an impending supply flood, but prices are getting some relief along with other markets from stimulus measures.