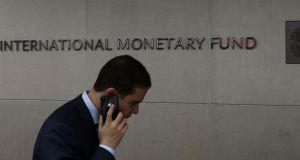 Additionally, the IMF’s downbeat outlook for global growth added to worries about an economic slowdown stemming from trade disputes.

A relatively quiet day on the Dublin market saw the Iseq all-share index dip 0.76 per cent.

All but three stocks on the smaller Iseq 20 index ended flat or lower on the day, with Paddy Power Betfair the biggest loser. The stock closed down 5.1 per cent at €67.76.

Dalata Hotel Group and Smurfit Kappa followed closely, down 3.32 per cent and 3.15 per cent respectively.

AIB, which cut its mortgage interest rate across a series of products while also introducing a new 10-year fixed rate for customers, dipped 0.39 per cent to €4.05.

Britain’s Ftse 100 ended 0.4 per cent lower, despite touching a six-month high earlier on the back of strength in financial stocks.

Shell and BP were the biggest drags on the main index as oil prices slipped after comments from Russia signalled the possible easing of a supply-cutting deal with Opec.

Blue-chip house builders, generally considered more vulnerable to Brexit jitters, were hit by the lingering uncertainty and fell 1.5-2.4 per cent.

But WPP added 2.1 per cent after a reported that buyout firm EQT was considering a bid for Kantar, the data analytics unit of the world’s biggest advertising group.

Water utility Severn Trent shed 1.6 per cent and its mid-cap peer Pennon slipped 0.8 per cent after JP Morgan downgraded the stocks. The brokerage said the threat of nationalisation of UK utilities was rising as the Brexit impasse may lead to a national election.

Airbus slid 1.6 per cent after the United States included large commercial aircraft and parts on its proposed tariff list of EU products. The European plane maker said it saw no legal basis for the move.

Suppliers to Airbus such as Safran, Leonardo and Rolls-Royce shed 1.3-2.1 per cent on the day.

European technology stocks had a particularly bruising day, falling 1.5 per cent in their worst session in 2½ weeks.

SAP led losses on the sector index with a 3.4 per cent slide after it was downgraded by UBS and HSBC.

Oil and gas stocks slipped 0.8 per cent, after hitting a near six-month peak earlier on Tuesday. Global oil benchmark Brent fell on Russian comments signalling the possible easing of a supply-cutting deal with Opec.

Bank stocks edged up 0.1 per cent, rising for the first time in three sessions to help restrain the broad benchmark from incurring a steeper loss.

Elsewhere Swiss drugmaker Novartis ended 2 per cent lower after completing the spin-off of its eyecare unit, Alcon, whose stock jumped about 40.2 per cent.

Boeing shares fell after the plane maker handed over far fewer aircraft in the first quarter due to the global grounding of its best-selling 737 Max jets following two fatal crashes.

3M and Caterpillar were down more than 1 per cent each and also weighed on the Dow.

Declines on the Dow were led by a 2.6 per cent drop in American Airlines Group after the carrier trimmed its first-quarter revenue forecast, mainly due to the global grounding of Boeing’s 737 Max jets.

Pentair shares tumbled 13.8 per cent, the most on the S&P 500, after the water-treatment company forecast full-year profit below expectations.

Walt Disney rose 1.4 per cent after Cowen and Co raised its rating on the company to “outperform”.