Sterling down 0.1% against the euro after Brexit vote 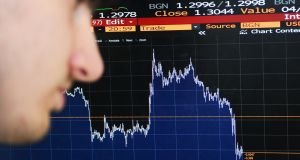 The British pound dipped against the dollar and the euro after MPs voted to reject Theresa May’s Brexit deal again.

The pound lurched lower on Friday after MPR rejected prime minister Theresa May’s Brexit deal for a third time, putting the British currency on track for its biggest monthly loss in five.

With Ms May losing again - albeit by a smaller magnitude than the previous two votes - sterling is set to remain under pressure on fears the United Kingdom will crash out of the European Union without a deal on April 12th.

Traders say the uncertainty about what happens next is hurting the currency.

“The focus now shifts to the alternatives that parliament will decide on next week and everything from revoking Article 50 to having a second referendum vote is on the table which will weigh on the pound,” said Nikolay Markov, a senior economist at Pictet Asset Management based in London.

Moves in the pound were not as dramatic on Friday as with May’s previous parliamentary defeats - traders say investors have scaled back their trading of the pound because it has become so difficult to predict amid the constant and sometimes arcane political developments.

Salman Ahmed, global investment strategist at Lombard Odier Investment Managers, said that although uncertainty persisted, the market was right to price out the risk of a no-deal exit from the EU.

Sterling had fallen to below $1.25 last year on fears Britain would crash out of its biggest trading partner.

“If the deadline is extended longer we will re-engage with sterling because that will be the start of the slow death of Brexit,” Mr Ahmed said.

After a special sitting of parliament, MPs voted 344-286 against Ms May’s 585-page EU Withdrawal Agreement, agreed after two years of tortuous negotiations with the European Union.

The defeat now means that Britain now has until April 12th to convince the 27 capitals of the EU that it has an alternative path out of the impasse, or see itself cast out of the bloc from that date with no deal on post-Brexit ties with its largest trading ally.

On a monthly basis, the pound has fallen 1.9 per cent, putting it on track for its worst monthly performance since October 2018.

Volatility indicators for the pound across the curve, a gauge of expected swings in the British currency in the coming months, fell across the board on Friday as traders took profits before the weekend.

One-month volatility gauges fell as much as 1 vol to 12.8 vol but still remained elevated by recent historical levels.

The lack of trading activity has reduced liquidity in the market, exacerbating swings in the currency.

British stocks weakened after Ms May’s deal was defeated, giving up some of their earlier gains. Core euro zone bond yields also fell after the vote as investors sought safety in government bonds.