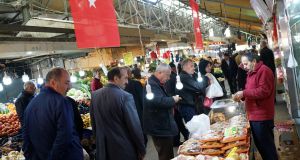 Moves by Turkey to stymie activity in the money markets in an apparent attempt to halt short selling in the currency has added to investor concerns. Photograph: Reuters

Fears that Turkey is burning through its holdings of dollars to stem a plunge in the lira ahead of national elections at the weekend drove the currency down as much as 5 per cent on Thursday.

Weekly data released by the country’s central bank on Thursday showed that foreign reserves dropped TL13 billion (€2 billion) in the week to March 22nd. That brings the total drop in the first three weeks of the month to TL45.1 billion, or roughly $10 billion (€8.9 billion), Financial Times calculations show. The reserves stand at about $24.7 billion.

The fresh currency sell-off added to deepening turmoil on Turkish financial markets, which have been in flux for almost a week in an uncomfortable echo of last summer’s crisis that sent the lira tumbling to record lows, with lasting effects on the economy.

“It was yet another sharp fall in the already low reserves,” said Piotr Matys, an emerging market currency strategist at Rabobank. “This sharp fall implies that the central bank has been intervening over the past few weeks, trying to keep the lira relatively stable ahead of crucial local elections.”

Moves by Turkey to stymie activity in the money markets in an apparent attempt to halt short selling in the currency has added to investor concerns.

The lira was 4.6 per cent lower in volatile action at TL5.57 per dollar by mid-morning in London, adding to more moderate losses during the Asian trading day.

Turkey’s benchmark 10-year lira denominated bond yield hovered above 18 per cent on Thursday, having fallen below 14 per cent earlier this year. The rise in yields reflects a drop in prices. Stocks dropped after the release of the reserves data: the benchmark Borsa Istanbul 100 index fell 0.8 per cent, leaving its weekly loss at 8.7 per cent.

Bankers and analysts at large international banks have reported that Turkish lenders appeared unable or unwilling to provide lira in exchange for currency this week, in what seems to be an attempt to prevent short selling.

Turkey’s banking association (TBB) on Wednesday night denied claims that the country’s lenders had been limiting or halting sales of lira to foreign banks.

But one London-based analyst, who asked not to be named, told the FT on Tuesday that Turkish banks told him they had been ordered “not to lend even a single lira to foreign counterparties”.

Huseyin Aydin, the TBB chairman, insisted on Wednesday that Turkish banks were not responsible. He said the reason for the rise in lira swap rates was that there was insufficient lira for foreign banks to buy dollars. Mr Aydin said Turkish banks were not sources of liquidity, but instead that they themselves were looking for it.

However, investors believe the banks have sold the cash in an effort to prop up the lira ahead of local elections that take place across the country on Sunday.

Recep Tayyip Erdogan, Turkey’s president, is worried that voter discontent over high inflation and rising unemployment could see his ruling party lose control of some big cities, including the capital, Ankara. – Copyright The Financial Times Limited 2019