Lyft slips below IPO price on second day of trading 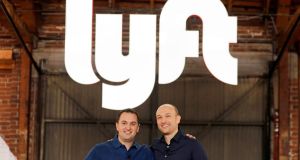 Shares of Lyft crashed through the ride-hailing company’s initial public offering price on just their second day of trading, tumbling as much as 10.5 per cent and matching the speed at which Facebook gave up its IPO price following its botched offering nearly seven years ago.

On Friday, Lyft’s shares opened at $87.24, popping 21.1 per cent in their debut on the Nasdaq stock exchange, but later pared gains to close up 8.74 per cent at $78.29. That valued the company at $22.2 billion after its offering was 20 times oversubscribed, similar to other high-profile IPOs.

Lyft’s fast swoon was reminiscent of Facebook’s debut in May 2012.

After pricing at $38 a share, Facebook opened more than 10 per cent above that at $42.05 and was up by as much as 18 per cent at one point before fading fast and leaving the deal’s underwriters to frantically defend the IPO price into the close of that first day, which like Lyft’s was a Friday.

Come Monday, however, that support was no where to be found and it opened at $36.53 and would not regain its IPO price for 14 months.

Whether Lyft can deliver the turnaround Facebook managed is a top question for investors. After hitting a life-time low about three months after its IPO, Facebook shares have gained more than 800 per cent to become the “F” in the vaunted FANG group of tech high flyers. It currently trades at $168.50.

Brokerage Guggenheim Securities started coverage on Lyft with a “neutral” rating, saying there is a lack of visibility on the path to profitability.

Lyft, the first ride-hailing company to go public, had a market share of 39 percent in the United States, as of 2018.

Lyft, considered a unicorn as it was a startup valued at least $1 billion before it made its market debut, was last trading down 9.7 per cent at $70.70, still slightly off its IPO price on Monday. – Reuters