One by one, global bond markets are flashing the same warning 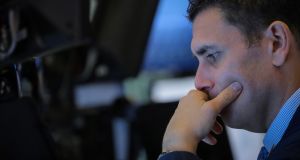 Yields in Australia and New Zealand dropped to record lows, after a closely-watched part of the US curve inverted on Friday as investors wager that a recession is coming. Trading volumes in Treasury future were more than double the norm in the Asian morning, while Japan’s 10-year yields fell to the lowest since 2016.

“Bond markets globally, along with dovish central banks, have been telling us a slowdown is on the way,” said Jeffrey Halley, senior market analyst at Oanda Corp., in Singapore. “Some parts of the world will be better equipped than others to handle this. The US can at least cut rates and apply monetary tools, while things could be worse for Europe and Japan, where they cannot.”

Treasuries have led a global debt rally amid bets that a recession and a rate-cutting cycle are coming. The spread between yields on three-month US bills and 10-year notes inverted for the first time since 2007 amid reports showing economic weakness in the US, France and Germany.

Money markets are pricing around a 90 per cent chance that the Federal Reserve will cut rates by 25 basis points by December, followed by another reduction in September 2020. This comes after the central bank projected no hikes this year at its policy meeting last week.

Open interest, a measure of outstanding positions across Treasury bond futures, jumped Friday as the yields on the 10-year cash bond dropped 10 basis points to 2.44 per cent. Hedge funds and other speculators have also cut shorts in 10-year futures after holding record positions as recently as September, according to the latest Commodity Futures Trading Commission data.

“Data is deteriorating globally,” said Tano Pelosi, portfolio manager at Antares Capital in Sydney. “It’s very unlikely that the Fed will hike again for some time.”

Australia’s 10-year bond yields fell as much as eight basis points to 1.756 per cent. New Zealand’s dropped to 1.899 per cent, a record low in data compiled by Bloomberg since 1985. In Japan, the benchmark fell 1.5 basis points to minus 0.095 per cent. Yields on German debt fell below zero for the first time since 2016 last Friday.

Australian bonds have rallied since central bank Governor Philip Lowe pivoted to a neutral stance last month from a long-held view the next move in rates would be up. The local yield curve flattened further, with the difference between three and 10-years narrowing by two basis points to 38 basis points. – Bloomberg