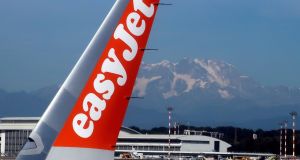 European shares began the second quarter of the year strongly as good economic data from China, along with signs of progress in its trade talks with the US, boosted investors’ appetite for risk.

Ryanair got caught in turbulence that followed rival Easyjet’s announcement that Brexit has slowed holiday bookings. The Irish airline was down 5 per cent at one point, but pared those losses, closing down 2.61 per cent at €11.36.

Dealers said that the airline’s shares rallied strongly towards the close. They pointed out that Ryanair has already factored weak fares into profit warnings issued last year.

Hibernia Real Estate Investment Trust added 1.05 per cent after announcing that it is selling an office block in Dublin for €35 million and plans to return €25 million to shareholders.

Building materials group CRH, an index heavyweight, climbed 2.21 per cent to €28.26. Traders said interest by activist investors in the Irish group’s US peer Eagle Materials helped boost its performance. CRH earns around half its revenues from the US.

In a related area, insulation specialist Kingspan was similarly strong, climbing 2.23 per cent to €42.18.

Banks gained ground as their business proved popular with investors across Europe. AIB was up 2.9 per cent at €4.118 while Bank of Ireland added 3.67 per cent to €5.505.

Paddy Power Betfair advanced 2.25 per cent to €70.30 after hosting a successful investor day in the US last Friday.

Easyjet shares nose-dived after the airline warned investors that concerns over Brexit had left travellers wary of booking for the peak summer season, a key period for aviation.

Shares in Easyjet closed 9.7 per cent down at 1,009 pence sterling in London yesterday after dropping as far as 1,005p, its lowest in a year.

Its announcement had a knock-on effect to the rest of the industry. Aer Lingus and British Airways owner, International Consolidated Airlines Group, shed 1.56 per cent to 504p.

Dealers in Dublin noted that Easyjet had appeared“bullish” about its prospects this year compared with Ryanair.

Easyjet relies on the UK for about 40 per cent of its bookings, giving it about twice the exposure to that market of its bigger Irish rival.

Automotive shares were strong on the second quarter’s opening day. Continental gained 5.2 per cent, while Daimler rose 4.1 per cent. The sector was also boosted by a Bloomberg report saying France’s PSA Peugeot-Citröen and Italy’s Fiat Chrysler Automobiles were exploring a European partnership, sending their stocks up 4.2 per cent and 2.4 per cent, respectively.

Banking stocks rose 2.7 percent, with Italian lender Unicredit among the strongest performers with a 4.3 per cent jump after Goldman Sachs added the bank to its conviction list.

Following trade talks which concluded in Beijing on Friday, China’s State Council said over the weekend it would continue to suspend additional tariffs on US vehicles and auto parts after April 1st.

General Motors rose 1.5 per cent and Ford Motor was up 1.9 per cent. The S&P auto parts and equipment index jumped 3.7 per cent. Chipmakers, which get a large part of revenue from China, also rose. The Philadelphia Semiconductor index was up more than 2 per cent. Additional reporting: Reuters