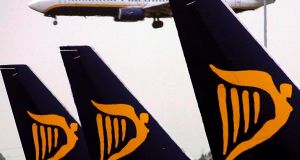 Ryanair shares were up marginally at €13.97. Photograph: Andy Rain/EPA

The Stoxx Europe 600 Index had fallen 0.1 per cent at the close, paring an earlier drop of as much as 0.4 per cent. Building and materials companies led gains after US president Donald Trump said he was going to spend “on infrastructure big”. Deutsche Boerse and London Stock Exchange Group, meanwhile, dragged financial-service firms lower as a deal between the two headed toward collapse.

Building materials giant CRH rose 2.3 per cent to €32.15 on the back of positive noises around US plans for a major infrastructural spend.

Packaging group Smurfit Kappa also followed industry-wide trends positive, ending up at €25.06. Bank of Ireland was flat at 22.4 cents after reporting a 16 per cent decline in its full year pre-tax profit last week. Rival Permanent TSB, meanwhile, rose 2.3 per cent to €2.69. Ryanair was up marginally at €13.97.

The state’s two biggest food companies fared better with Glanbia and Kerry both making gains. Hotel group Dalata was up nearly 1 per cent €4.39.

Britain’s top share index closed slightly higher on Monday, helped by earnings updates and weak sterling, although motor insurers were hit by a regulatory change that could lead to higher payouts.

Companies such as Unilever, Bunzl and Convatec were among the top gainers. Business supplies firm Bunzl posted better-than-expected results, boosting it to the top of the FTSE, up 3.4 per cent. Convatec, the medical supplies company, was up 1 per cent. Unilever was up 1.5 per cent. Near Friday’s close chief financial officer Graeme Pitkethly said the Kraft Heinz bid had been a “trigger moment” for Unilever to focus more on short-term value creation.

RBS was down 1.1 per cent, maintaining Friday’s move down after the bank’s results disappointed. Retailer ABF, which owns discount fashion brand Primark and Penneys, fell 0.9 per cent after its results.

Europe’s benchmark index of leading 300 shares fell 0.1 per cent. MSCI’s benchmark world stock index slipped 0.03 per cent after it hit a record high Thursday. A proposed €29 billion merger between the London Stock Exchange and Deutsche Boerse to create Europe’s biggest stock exchange looked dead in the water due to an inability to meet European antitrust demands.

Assicurazioni Generali lost 2.8 per cent after Intesa Sanpaolo abandoned the idea of a merger with the Italian insurer. Intesa jumped 5.5 per cent. PostNL tumbled 7.3 per cent, the most among Stoxx 600 firms, after reporting a 25 per cent slump in fourth-quarter underlying operating profit.

The S&P 500 and the Dow Jones Industrial Average edged up to record intraday highs on Monday, after president Donald Trump said he would make a “big” statement on infrastructure on Tuesday.

The Dow hit its 11th straight record close on Friday, even though the index has not moved more than 1 per cent in either direction since December 7th. On Monday, six of the 11 major S&P 500 sectors were higher, with gains in energy and financials helping counter losses in consumer staples. Among stocks, electric carmaker Tesla fell nearly 4 per cent to $246.42 after Goldman Sachs downgraded the company’s stock to “sell” from “neutral” and lowered its price target. La Jolla Pharmaceutical surged 75 per cent to $34.79 following the success of its lead experimental drug in a late-stage study. Shutterstock dropped 13.4 per cent to $44.73 after the stock image provider reported quarterly revenue that missed analysts’ average estimate.