Fasten your seat-belts for a sterling roller coaster

As Brexit withdrawal talks reach a crunch phase, the UK currency is firmly in the spotlight 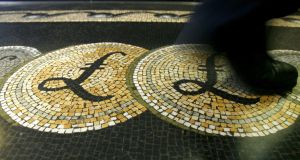 Sterling has edged up over the last three weeks, gaining to under 89p against the euro now, compared to 91p in late August.

Get ready for the sterling roller coaster. The UK currency has gained some ground in recent weeks on reports that the UK and EU were making ground in the Brexit talks. But with the first of – probably – three crucial summits of EU leaders due to take place this week, confidence about a deal is going to likely to ebb and flow, possibly quite dramatically. And this is likely to prompt volatility in the sterling exchange rate as the withdrawal talks head towards an uncertain end-game.

Sterling has edged up over the last three weeks, gaining to under 89p against the euro now, compared to 91p in late August. The mood music in the markets is that a deal remains more likely than not. But big risks remain

“Even though the exchange rate has been in a reasonably tight range for the last 11 months between 87-90p, we see potential for politically driven volatility in the remaining months of the year,” said Garret Grogan, global head of trading at Bank if Ireland. “We recommend that customers take the foreign exchange risk out of their business by hedging.”

Despite talk of compromises, the key issue of the Irish Border backstop remains to be agreed in the talks – and so far no way has been found to do this. The backstop is the last remaining major blockage to finalising the withdrawal agreement, the legal deal on the UK’s exit. The two sides also have to agree a political declaration on the nature of their future relationship, details of which will be negotiated after the UK leaves.

Part of the reason for sterling’s recent strength – and some gains it made against the US dollar this morning – are reports that progress is being made on the backstop issue. But care is needed here. There is, as yet, no sign of a solution to which both sides can sign up and some commentators believe that the markets are not taking sufficient account of the risk of a breakdown in the talks and a chaotic no-deal Brexit. The IMF warned of the costs of a no-deal Brexit in a report on Monday and if fears grow of this, sterling will be heavily sold on the markets, bringing new instability for Irish exporters.

The backstop is intended as a guarantee that there will be no Border in Ireland in future, no matter what the outcome of the future EU/UK trade talks. The EU has proposed that it would effectively involve the North remaining in the EU trading bloc after Brexit, but the problem for London – and the DUP – is that this would mean customs checks in the Irish Sea.

It does appear that the EU side is working to “de-dramatise” the backstop – as Michel Barnier, the EU’s lead negotiator has put it, with some deworking of its text going on. The Financial Times reported that one option was to allow UK customs officials to do some of the examination work, rather than EU officials and that some of the checks could take place at factories in the UK. However sources say that this is still in the context of checks on goods crossing the Irish Sea from Britain to the North.

This is a clear attempt to take some of the heat out of the backstop plan and Mr Grogan says the markets have picked up this change in tone. Political signs of attempts to reach a deal will give sterling support. But the core problem remains. If the UK leaves the EU trading bloc, there have to be goods checks somewhere. If there are new checks on goods crossing between Britain and the North, this still leaves a big political problem for Theresa May. Any checks on goods crossing the Irish Border creates issue for the Irish Government.

A close future trading deal between the UK and EU may lessen the Border problem in the years ahead , but this is still a long way off. And the EU will insist that checks take place somewhere, to protect the integrity of the single market – and in any case this is in line with normal international trading practices and WTO rules.

It is still difficult to see a smooth path to a withdrawal deal. And even if one is agreed, Theresa May still have to get it through the UK parliament. So significant sterling volatility is a possibility in the weeks ahead. For Irish exporters, studies have showed that at rates above 90p to the euro, serious competitiveness issues emerge. The flip side is that if the risk of a no-deal Brexit in March of next year is seem to decrease or disappear, the UK currency is likely to bounce. “If negotiations can finally overcome these last few hurdles we envisage a significant boost for the pound,” said Grogan of Bank of Ireland. But in the meantime, he warns, risks remain.

UK economic data may also play a role in the UK currency’s move, but given the high stakes, sterling’s swings are going to be all about Brexit and, crucially, whether a damaging no-deal outcome can be taken off the table.