Is the stock market having a panic attack or a full-blown breakdown?

David Kohl, currency strategist with Julius Baer Bank of Germany has said that there is no cause for panic after the US stocks crash and that this "correction" in the markets is still too small to impact on the economy. Video: Reuters 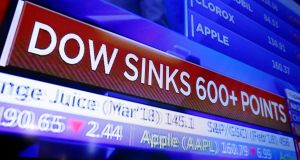 Cliff Taylor: We will just have to sit tight for a while now and see whether this is a passing squall or a full-scale storm.

Why have the stockmarkets had a sudden panic attack?

Stockmarkets fall heavily when they are hit with a wave of people selling and very few buying. The bout of nerves which started on Friday and led to chaotic trading on Wall Street on Monday relates to fears that stronger US economic growth may lead to rising inflation and interest rates.

While strong growth is usually good for companies and the market, investors are looking ahead, worrying that interest rates could rise more quickly than expected, increasing the cost of borrowing for companies.

Higher interest rates also give investors a better return on safe assets like Government bonds and make them less likely to invest in risky assets like company shares.

Stockmarkets have got a huge boost from lower interest rates in recent years andthe party is now coming to an end. The extent of the hangover will depend on how solid company valuations are when interest rates start returning to normal. More volatility on Wall Street in early trading on Tuedsay suggests more swings almost certainly lie ahead.

But US interest rates have been on the rise for some time now. And US growth is strong. Why the sudden panic?

Good question! There is much debate about this and it matters, because it will affect what happens next. The trigger last Friday was US figures showing wages growing at an annual rate of 2.9 per cent, the highest level in a decade. Higher wages are a healthy sign of economic recovery and it does seem perverse that the markets is falling just as growth forecasts are being increased. But markets try to reflect future economic conditions rather than current ones – and in any case their link to real economic activity is often debatable.

Rising wages are one of the clearest signals of inflation. The US central bank – the Federal Reserve Board – has said it expects to increase interest rates three more times this year, after three increases last year. The wage figures got investors worrying that interest rates might rise more quickly. As sometimes happens in the markets, the figures seemed to get people to focus on something they were aware of anyway, but had chosen to largely ignore.

Is it that simple?

It’s never simple. Some investment experts argue that what has happened should not be too closely linked with fears of rising interest rates and was just a normal correction after big gains which have seen the US market rise by some 40 per cent since the election of President Trump, or more than a quarter in the past year. This is well ahead of average gains which are around 8 per cent a year. On this view it may all pass over quickly.

A lot of it comes down to arguments about whether there is a bubble in the US market – with a lot of stocks valued way too highly as interst rates rise – or whether the levels of share prices may have just run a bit ahead of what was justified.

In a note to clients this morning, Brian O’Reilly, head of investment strategy at Davy stockbrokers said that “markets had simply run too far too fast.” The valuations put on companies “were looking increasingly stretched even against a good earnings backdrop” and investors had gotten complacent. O’Reilly says that there may be more selling to come, but that strong US growth and corporate profitability will underpin the market.

But weren’t the big swings seen on Wall Street on Monday unusual?

Yes, very. At one stage the Dow Jones Index of leading US shares had lost around 6.25 per cent as it seemed to crash in value in late trading. Then it bounced upwards ,before falling to close down 4.6 per cent. The nature of the modern trading world – where trades are often driven by computer generated programmes – can sometimes lead to big swings. And reports today point to the complex bets placed by investment funds relating to volatility in the market.

There has been remarkably little volatility over the past year, so a lot of these bets may now be unwinding. But just what caused Wall Street to panic so suddenly on Monday remains a matter for debate.

Some investors will have made money from the chaos, with some hedge funds holding bets that shares – or certain funds with particular exposures – would fall. But the nature of trading on Monday suggests that most people were “long” the market – in other words they were betting that shares would continue to rise.

Some analysts put the volatility down to investors being caught unawares after a long period of calm. Others feel that the fundamental uncertainty about where inflation and interest rates are going to go could lead to more trouble ahead.

Why all the confusion about what central banks will do?

This is because central banks cut interest rates to effectively zero during the crash and pumped in vast amounts of cash in an unprecedented rescue operation. What we are seeing now is confusion as this policy is reversed. No one is quite sure what the “ new normal” will look like, or how quickly we will get there. US central bank interest rates are now at 1.5 per cent and are expected to rise to 2.25 per cent this year. Investors now worry they could head higher, quicker.

This is reflected in long-term interest rates, which are set by trading in government bonds. US ten year interest rates have risen from 1.5 per cent in mid-2016 to around 2.75 per cent now. Were they to head up over 3 per cent it would be an important move, as this US rate is one of the key prices of money in the world economy. This is one to watch as higher rates would hit companies with large borrowings and also affect the sums behind many other investments.

Will this affect the US economy?

Only if the market keeps heading sharply downwards. Stocks have lost around 8.5 per cent from their recent record high, but this was after a long period of gains. A big drop or more volatility could hit economic confidence and business investment, but we will just have to see how it plays out in the days and weeks ahead.

How will this affect me?

Pension funds will have taken a bit of a knock in recent days, but that is after their equity holdings made large gains over recent years. Pension funds also invest in bonds, which have come under a bit of pressure, though higher interest rates have some benefits for the pension sector too.

Those close to retirement should already have the bulk of their funds moved out of risky assets. Irish and European shares have also fallen heavily, but again after strong gains. We will just have to sit tight for a while now and see whether this is a passing squall or a full-scale storm.