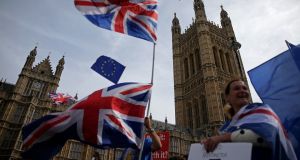 “A Brexit that pleases nobody in Westminster now seems likely – just about – to be passed.” Photograph: Daniel Leal-Olivas/AFP/Getty Images

As a Brit, but one who has lived mostly in Ireland for the past three decades, the perspective on Brexit that is gleaned from spending some time in the UK leaves me feeling neither on the inside or the outside of the debate. It’s an unusual position but it at least offers a slightly different point of view when compared with the weirdness of the warring tribes that now inhabit the UK (and elsewhere).

Words are important here: it is not hyperbole to describe Britain as a nation engaged in a most odd civil war. Brexit has consumed the body politic, rendering it useless, not just in terms of preparing for exit from the European Union but also with regard to anything else the governing classes are supposed to do.

While Brexit dominates the headlines and airwaves, people unconnected with the media or Westminster avoid talking about it. Many commentators think that Brexit boredom has set in. That could well be the case. But fear is also an important driver: assaulted with dire Brexit warnings from business, the NHS and the Bank of England, ordinary citizens also have to cope with prominent reporting, particularly by the BBC, of the views of an eccentric rump of economists who promise a land of milk and honey after next March. Hardline Brexiteers echo this baseless optimism.

Ian Dunt, one of the best Brexit analysts around, put it well: “The Economists for Free Trade are a ragtag bunch of Brexit-supporting eccentrics whose primary function is to make all other economists feel better about their life choices.”

Attention to detail is noticeable only by its absence. It’s so easy for the Brexit ultras to trash the governor of the Bank of England’s warnings of a 35 per cent fall in house prices as just another forecast of “project fear”. Few, if any, media organisations lead on the way the vast majority of economists view the eccentrics in the same manner mainstream scientists look at climate change deniers. The Bank of England’s views have stood the test of time pretty well and it is simply tribal madness to continue to dismiss them.

Trying to make sense of all of this is beyond the cabinet, let alone middle England. The familiar British response is consistent with much of their history during turbulent times: resigned stoicism. But that apparent calm is skin deep at best. This is a divided and heavily conflicted society.

The ruling Conservative Party seems daily to find new ways to disgrace itself: last week the bulk of its MEPs aligned themselves with Hungary’s fascist regime. The only game in town is to oppose Brussels at every opportunity, even if that means debasing everything that you are supposed to stand for.

The government informed Britons in the past week that their passports, driving licences and phones may not work as usual in Europe when the UK leaves in six months’ time. These are risks to be added to those already known about food and medicine imports. While the British may well have had, in the immortal words of Michael Gove, enough of experts, it seems that they have also had enough of exports.

The Tories are supposed to be the party of business. The (new) Brexit secretary this week admonished the boss of department store chain John Lewis, who suggested that Brexit is having an impact on the high street. Dominic Raab thinks that John Lewis should be better run rather than use Brexit as a partial explanation for trading problems.

This is the new template: Brexiteers are never going to accept responsibility for the consequences of their actions, even if that means attacking the people who normally make up their core supporters. Another minister, when asked why, in Theresa May’s plans, service industries have been thrown under the bus, replied that financial services can afford the disruption.

Jacob Rees-Mogg’s European Research Group of MPs has failed to agree its Brexit plan and its much-vaunted publication has been shelved. Those details again: once we get into them, the full horror of Brexit is revealed. So best not get into them. The only thing that matters now is to leave.

Amid this nonsense, the bizarre thing is that a deal is taking shape. At least a deal that will get us over the March 29th deadline and into transition. It amounts to another kick of the can down the road. Insiders worry that the obvious fudges that this will involve, not least on the Border, will not get through the British parliament.

But a Brexit that pleases nobody in Westminster now seems likely – just about – to be passed, not least by the nutters who see it as the best, if not only, route out of the EU. There’s a lot that could go wrong but the odds have shifted, slightly, towards a deal.

Ireland finds itself in an odd place: compared with the chaos and division so visible on both sides of the Atlantic, it looks like a haven of stability; a country that is cohesive, well run and at ease with itself. I hope IDA Ireland uses this in its marketing pitches: it’s a powerful message to add to the usual corporation tax and well educated workforce mantra.