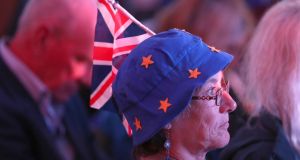 Supporters at a national programme of Brexit-focused action at the Town Hall in Dover on Friday, September 14th. Photograph: Gareth Fuller/PA

What is the balance of bargaining power between the European Union and the United Kingdom as we approach the Brexit negotiating endgame? Is Brexit too heavy a burden for the UK’s political union to bear? Is a blind Brexit therefore the most plausible outcome of the talks on withdrawal and a future framework?

It helps to stand back from the immediate noise of the Brexit drama to look at these three strategic questions, the answers to which are highly consequential for Ireland. This state has hitched its negotiating wagon to the EU team and now relies heavily on their solidarity for a beneficial outcome. Whether that is delivered depends in good part on how the British side weighs up the effects of a harder or softer deal on the future of the UK itself. A compromise fudging and postponing of the most difficult decisions may be the only way to avoid breakdown.

Brexit is a radical answer to the question of whether EU states want to scale up or down the level and scope of their integration. The usual approach to such heterogeneous preferences among a growing membership is differential integration, whereby some states go ahead with projects such as the euro or defence while others opt out. It is much easier to negotiate opt-outs while remaining a member state because you can veto departures from the status quo. Ahead of the Brexit referendum in June 2016, David Cameron tried unsuccessfully to get more opt-outs on migration.

He failed because the relative inter-governmental bargaining power changes radically when exit is chosen, in a transition to differential disintegration, according to a convincing argument made by the political scientist Frank Schimmelfennig in the Journal of Common Market Studies. Brexit finds the remaining 27 states defending the status quo against the departee, while the institutional balance of power and the decision-making rules shift towards them too.

That gives the commission mandate to negotiate more resilience against pressure from individual governments in response to British lobbying. Material bargaining power is also loaded against the UK because they are four times more dependent on EU trade than the EU is on trading with the UK, making their continuing interdependence increasingly asymmetrical.

Ireland’s interdependence with Britain is also asymmetric because of their obvious differences in scale, wealth and power; but this inequality was mitigated by EU membership. That now gives Ireland important leverage in the Brexit talks as a most affected veto player defending the status quo. The backstop clause agreed last December to keep Northern Ireland linked to the customs union and single market vividly expresses that changed balance of power.

The UK government must decide how to reconcile the contradiction between that commitment and its demand that the UK leave both regimes. An internal differentiation of Northern Ireland threatens to set precedents for Scotland. Both voted to remain in the EU. The predominant English vote to leave was partly an expression of a nationalism both resenting and seeking greater voice in a devolving UK.

These fissiparous tendencies are made worse by the dysfunctional ways the central British state and a deeply divided Conservative Party and government respond to competing pressures and demands on Brexit from devolved nations and English regions. The Scottish and Welsh governments say the existing UK inter-ministerial council is merely consultative at London’s whim and should have stronger rules to resolve disputes and make common decisions. That logic leads in a federal direction, but there is little political will from London or in either main party to see that through. Northern Ireland is voiceless without an executive, while the DUP pursues mere party and unionist advantage in Westminster.

That combination of central and devolved British dysfunctionality on Brexit drives the growing disenchantment with the union in Northern Ireland more than traditional nationalism. It is most apparent in polling among nationalist supporters and others, much less so far among unionists, with more believing they would get a better deal from Dublin in the EU than from London outside it. Prudent preparation, deliberation, debate and education about possible constitutional futures, including unification, is sensible in these circumstances, however provocative are Sinn Féin calls for a Border poll.

These uneven bargaining powers, unresolved issues and increasing UK political instability make some kind of blind Brexit deal the most plausible outcome this autumn. It would combine a Northern Ireland backstop with a vague commitment to a longer-term withdrawal agreement. That would postpone decisions but avoid a breakdown which would really speed up the UK’s constitutional crisis.

1 Harris agrees with PSNI that army council still oversees Sinn Féin and IRA
2 Drug dealer loses codes for €53.6m bitcoin accounts
3 A Dad with brain cancer: I was given 18 months to live, it put things into perspective
4 Ben Affleck: ‘It took me a long time to admit that I am an alcoholic’
5 The close links between Sinn Féin and IRA untangled
Real news has value SUBSCRIBE