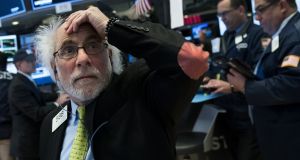 Financial markets have got a dose of the wobbles, with a big drop on Wall Street after a day of chaotic trading on Monday the clearest evidence yet that nerves are on edge.Wall Street had fallen on Friday, knocking on to Asian shares early on Monday. European markets ended sharply down, with the ISEQ index in Dublin losing 1.9 per cent and the Stoxx 600 Index of European shares down 1.6 per cent. And then Wall Street endured an afternoon of hectic trading, with the Dow Jones Index down by more than 6 per cent at one stage before closing down by more than 4 per cent in the biggest correction in six and a half years.

Last year was an exceptionally calm one on financial markets, but 2018 looks like it might be a lot more volatile. At the heart of this, most analysts believe, is uncertainty about the pick up in inflation and global interest rates – rock bottom borrowing costs have underpinned share markets for the last few years and are now slowly coming to an end. Central banks worldwide are at various stages of unwinding the monetary stimulus they injected during the economic crash and the process of “normalisation” is causing frayed nerves.

Nobody is quite sure how it will all play out, but the drama on Wall Street last night was unexpected.It may have been driven by automated trading programmes, but the huge swings will unsettle investors. Some have argued that shares were fundamentally overvalued and ripe for a fall.

Ironically, the uncertainty comes as global growth prospects look strong, with forecasts for global growth this year now around 4 per cent, or a bit higher on some estimates. Strong growth boosts companies’ earnings – which is positive for markets. But at the moment more focus is being put on the downsides – for markets – of growth, in boosting inflation and leading to higher interest rates.

The trigger for Friday’s fall – which gathered pace on Monday – were US figures published on Friday, showing annual wage growth of 2.9 per cent, the highest in a decade. As this was an indicator that inflation was picking up, it led to a rise in the key US 10-year interest rate – which anticipates future inflation – which traded well over 2.8 per cent at one stage on Monday before falling back a bit in late trading.

Higher long-term interest rates increase the cost of funding for companies and also provide investors with more attractive options in the bond market, which competes for their cash with equities. So US equities, which are already trading at strong valuations, took a hit on Friday, with the Dow Jones index of leading share down 2.5 per cent and the wider S&P 500 losing over 2 per cent, its biggest drop since September 2016. But this was nothing compared to what was seen on Monday, as the markets seem to get caught at one stage in a kind of “flash crash”.

Big moves have been rare over the past year or so as market volatility was remarkably low amid a bull market with the S&P gaining 20 per cent least year.Now it seems we may be entering a new period of uncertainty.

The fall in interest rates during the crisis was unprecedented and provided equity markets with a big boost. After all, if the return on investing in Government bonds was tiny – or in some cases even negative – then the return on equities looked attractive. US interest rates have been on the way up for some tine now. Europe is behind in the cycle and the ECB is still grappling with when to stop buying bonds to stimulate activity. But European growth is picking up too with higher short-term interest rates to follow, maybe next year.

Government bond markets – which reflect expectations of where interest rates will be in the future – are already starting to anticipate further official rate rises by central banks. And there are some worries about the speed they may happen, or the impact of this on growth,corporate profits and investment trends.

As often happens in the markets, the wage growth figures did not lead to any fundamental change in expectations. Most investors expect three more 0.25 percentage point interest rate rises from the US Federal Reserve Board this year as the Fed has guided itself – or four at most. But the figures did seem to bring an accumulation of worries to the fore – about inflation, about the change of chair at the Fed and about the possible impact of recent US tax reforms on the budget deficit. And history teaches us that bond markets in particular can move quickly once a trend sets in, even if bonds have found a bit of support on Monday morning from buyers.

The backdrop is that financial markets are already at high valuations. As the outgoing Fed chair, Janet Yellen, pointed out on Friday when asked about US stock valuations: “ Well, I don’t want to say too high. But I do want to say high. Price-earnings ratios (a key measure of share valuations) are near the high end of their historical ranges.”

So what should we watch in the days ahead . Perhaps the key is the US 10-year interest rates. Were it to move over 3 per cent, it would fray nerves further. Central banks had to press the panic button during the crisis, but taking away the sweetie jar of monetary stimulus is far from straightforward. But late on Monday, shares fell even as bond markets found some support from investors, The unexplained nature of the chaotic swings on Wall Street will now reverberate around the markets.