European stocks rise for third day in a row

Markets report: The Iseq adds 4.6% as banks claw back losses 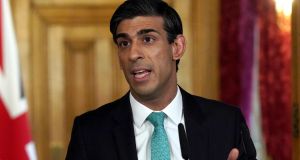 The UK chancellor, Rishi Sunak, has announced supports for the self-employed

European stocks reversed course to end higher on Thursday, tracking gains on Wall Street, while investors awaited a vote by the European Parliament on emergency funds to cushion the blow from the coronavirus outbreak.

US stock indices surged despite a record high in weekly jobless claims, with the data seen to boost the case for more stimulus measures to fight the economic impact of the pandemic.

The Iseq rose 4.6 per cent as equity markets continued to claw back losses. AIB, which was a heavy faller as stocks crashed earlier this month, surged 17 per cent to €1.21, while Bank of Ireland added 6.5 per cent to just below €2.09.

The FTSE 100 added 2.2 per cent, after falling as much as 3 per cent earlier in the session, to manage its first three-day gain since the coronavirus crisis took hold in February. The mid-cap FTSE 250 rose 3.8 per cent for its fifth consecutive day of gains.

The Bank of England said it was ready to ramp up its bond-buying programme further if needed, while UK chancellor Rishi Sunak announced supports for self-employed people.

Shopping centre operator Intu declined 6.4 per cent after saying it would seek debt waivers from its lenders and aid from the UK government’s support schemes as the crisis hits retail rents.

Electricals retailer Dixons Carphone jumped 12.5 per cent even as it warned of a hit to earnings due to the pandemic.

After trading down earlier in the day the pan-European Stoxx 600 index recovered to close 2.6 per cent higher and has now added almost 15 per cent over the past three sessions.

The index is still down 26 per cent from a record peak hit in February, with a recession in Europe now looking imminent.

The European travel and leisure industry led gains for the day, adding about 7.5 per cent as investors bought back into the sector worst hit by the outbreak.

German shares rose 1.3 per cent, while a survey showed consumer morale in Europe’s biggest economy tumbled to its lowest level since 2009. the French CAC 40 added 2.5 per cent.

Aircraft manufacturer Airbus was among the largest gainers on the Stoxx 600 after it said it was reducing the production of aircraft wings as it slows operations due to the pandemic. The stock soared 15.7 per cent to €71.50.

Wall Street stocks rose as investors anticipated more aggressive stimulus to aid businesses and families wrecked by the economic fallout of the pandemic.

The number of Americans filing claims for unemployment benefits surged to 3.28 million last week as state-wide lockdowns brought the economy to a halt and unleashed a wave of layoffs.

United Airlines, American Airlines and Delta rose between 7 per cent and 13 per cent, while Boeing rose 15 per cent to build on a strong rally this week, boosted by a $58 billion (€52.5bn) provision for the aerospace industry in the latest aid bill. – Reuters.