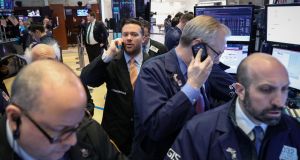 European shares rose to five-month highs on Friday, starting March on a strong footing, as a fresh batch of corporate updates fuelled risk appetite even after US president Donald Trump raised some concerns over trade talks with China.

The pan-regional Stoxx 600 index closed up 0.4 per cent after hitting its highest since October 8th earlier in the session.

“Momentum has flagged slightly in recent sessions and concrete news of an agreement between the US and China is now needed to prolong the rally in risk assets,” wrote Peel Hunt analyst Ian Williams. In the meantime it was up to corporate earnings to maintain morale, he added.

The Iseq was up 1.3 per cent, outperforming its European peers as worries that Britain will crash out of the EU without a deal at the end of this month eased. The market has come to be seen as a barometer for Brexit sentiment.

AIB shares, however, fell 2 per cent to €4.05 after the bank reported a dip in profit for last year and a lower-than-expected level of capital reserves. The bank also indicated that the 1,400-strong workforce in its loan-restructuring unit could be targeted for cuts as its bad debt levels decline to “normalised” levels. Rival Bank of Ireland fell 1 per cent to €5.65.

The bourse was, however, buoyed by Ryanair, which rose 4.7 per cent to €12.72. The airline launched a new seat sale and an upgraded 2019 winter schedule earlier this week.

It was also a good day for the Iseq’s two largest food companies, with Kerry and Glanbia up 3.8 per cent and 1.5 per cent respectively in line with the positive sentiments globally.

The FTSE 100 ended the week on a positive note, helped by strong gains from big hitters WPP and London Stock Exchange Group. London’s premier index closed up 32 points, or 0.45 per cent, at 7,103.73 as it was also boosted by better than expected economic data from China.

Advertising giant WPP led the FTSE 100 higher, gaining 40.4p to close at 866.2p. It came despite the firm reporting a hefty drop in annual profit and warning that challenging conditions will persist into the first half of 2019. The group posted a 30.6 per cent decline in full-year pre-tax profit to £1.46 billion for 2018, while revenue fell 1.3 per cent to £15.6 billion.

Also riding high was London Stock Exchange Group itself. The exchange operator booked a 14 per cent rise in operating profit to £751 million in 2018, while revenue jumped 8 per cent to £1.9 billion.

On the FTSE 250, Superdry shares were trading higher after founder Julian Dunkerton officially demanded a shareholder meeting as part of his efforts to stage a comeback at the fashion chain. Shares in the fashion chain ended up 14.5p at 532.5p.

Among individual moves, Italian luxury group Moncler stole the spotlight, rising 11.1 per cent for its best day since January 2014 after its 2018 results, which broker Jefferies called “remarkable”. Moncler peers benefited from the rally, with Gucci owner Kering up 3.2 per cent, LVMH up 1.5 per cent and Burberry rising 3.1 per cent.

Wall Street’s main indexes climbed on Friday as strong economic data from China fed into optimism around trade, but muted US economic data kept a lid on gains. The benchmark S&P 500 index is set to snap a three-day losing streak. The index has risen more than 11 per cent this year, bolstered by progress in trade talks and the Federal Reserve’s cautious stance on interest rates. Of the 11 major S&P 500 sectors, six were higher.

1 Coronavirus: We must save lives but we also need to live
2 Avoca warns of redundancies due to coronavirus
3 Moving in and out of lockdown is a recipe for economic disaster
4 Grounded Aer Lingus pilots develop fix for turnaround glitches
5 Over 400 complaints from migrant workers at meat plants lodged with WRC
6 Staff at Dublin and Cork airports to vote on work practice changes
7 Taxi app Free Now blames ‘technical issues’ for driver payment delays
8 Companies without tax clearance shut out of Covid wage subsidy
9 BT and Arnotts unlikely to be last retail victims of Covid-19
10 Ufurnish: ‘It’s like Skyscanner, but for furniture’
Real news has value SUBSCRIBE