Stoxx 600 posts worst day in two months, Germany, France both down 2 per cent 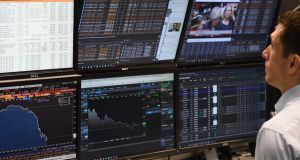 On Monday the FTSE 100 ended down 0.8 per cent on its third session in the red, after rising by the same level earlier in the day. Photograph: Daniel Sorabji/AFP via Getty Images

European shares posted their biggest daily drop in two months on Monday, with most major markets including Germany and France slumping more than 2 per cent, as a reimposition of US metal tariffs on Brazil and Argentina triggered a decline in global sentiment.

After an upbeat November, its third straight month of gains, the pan-European Stoxx 600 index closed down 1.6 per cent, erasing session gains after positive factory activity data from China and major euro zone economies had earlier taken it to near four-year peaks.

“It’s a function of markets having done reasonably well in November post-settling-down of nerves around Brexit and also US-China trade, coupled with first trading day of the month,” said Will James, senior investment director, European equities, at Aberdeen Standard Investments.

After a difficult week last week and against the trend elsewhere, the Iseq’s main financials Bank of Ireland and AIB ended the session up 1 per cent at €4.61 and €3 respectively. Ryanair shares fell 1 per cent as the airline commences legal action to stop its chief operating officer Peter Bellew from joining rival Easyjet. The High Court will on Tuesday begin hearing the action.

Building materials giant CRH fell back 1 per cent to €34.35 after a strong set of results last week, which showed earnings jumped by 27 per cent to €3.2 billion in the nine months to September 30th. Insulation maker Kingspan was up marginally at €49.30 after pledging to cut greenhouse gas emissions from its businesses around the world to zero by 2030. Hotel group Dalata, meanwhile, was down 3.5 per cent at €5.23.

UK shares handed back gains to close lower on Monday as a combination of US president Donald Trump setting off global trade worries and disappointing data from the world’s biggest economy doused the morning’s cheer. The FTSE 100 ended down 0.8 per cent on its third session in the red, after rising by the same level earlier in the day, while the mid-cap FTSE 250 dipped 0.5 per cent.

All but two sectors recorded falls on the main board, with losses led by a 7.4 per cent fall in online grocer and technology company Ocado after launching a convertible bond issue. Burberry, which like other luxury retailers counts Asia among its biggest markets, declined by 5 per cent after data showed Hong Kong’s retail sales in October fell by their steepest on record as anti-government protests spooked tourists and hit spending. Other news-driven moves saw small-cap Ted Baker fall 8 per cent to its lowest level in more than a decade after the retailer said it may have overstated inventory by as much as £25 million.

Losses across European markets were broad-based with a 2.7 per cent fall in utility stocks leading declines, with Latin America-exposed Italian utility Enel sliding 3.7 per cent. Steel and aluminum producers such as Norsk Hydro and ArcelorMittal weighed on the materials sector, but it lost the least among major sectors as mining giants BHP and Rio Tinto gained on higher iron ore and copper prices. Rising oil prices limited slippage in the energy sector to 0.8 per cent, while other sectors gave up more than 1 per cent .

US stocks fell on Monday after president Donald Trump decided to restore tariffs on metal imports from Brazil and Argentina, and weak factory activity fanned worries of a slowing domestic economy due to a long-drawn trade war with China. By early evening, the Dow Jones Industrial Average was down 237.30 points, or 0.85 per cent, at 27,814.11. Retail stocks were in focus, with Cyber Monday sales on course to bring in a record $9.4 billion. However, the sector was down 1.22 per cent. Energy sector rose 0.10 per cent , tracking oil prices. The other 10 major S&P 500 sectors were trading lower. The technology sector slipped 1.43 per cent and was the biggest drag. Among other stocks, streaming device maker Roku tumbled 14.45 per cent after Morgan Stanley downgraded its shares. – Additional reporting by Reuters