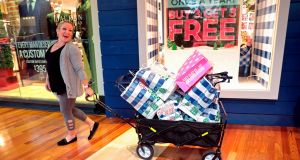 In US retail stocks dipped on signs of a tepid start to in-store Black Friday sale. Mona Spiker hauls away her purchases during Black Friday in Missouri. Photograph: Cristina M Fletes/St Louis Post-Dispatch via AP

Glenveagh Properties closed flat. The company announced that it has completed the construction and sale of its 90-unit development at Herbert Hill, Dundrum, to an institutional investor for a price in excess of €55 million.

The FTSE 100 fell 0.9 per cent, while mid-cap stocks on the FTSE 250 snapped a five-day winning streak and shed 1 per cent, their worst day in almost two months, amid pre-election jitters.

Housebuilders and retailers also fell after a survey showed consumer confidence in the UK is at its joint-lowest level since November 2013.

A number of banks lost ground after HSBC and Santander were ordered to pay back overdraft fees to thousands of customers. HSBC closed down 0.8 per cent, while Santander was 0.7 per cent lower. Blue-chip banks RBS and Lloyds gave up 2.5 per cent each.

Online grocer Ocado jumped 9.7 per cent after it announced it had signed a multimillion-pound deal to provide its shopping platform to Aeon, one of Japan’s largest retailers.

Shares in Daily Mirror publisher Reach surged 15 per cent after it expressed confidence about meeting annual targets. But news publisher DMGT slipped 0.2 per cent after saying it would buy the “i” newspaper and website from JPI Media.

The pan-European Stoxx 600 index ended the session down 0.4 per cent, though there was a slightly better picture in France and Germany, where the Cac 40 and Dax both ended down about 0.1 per cent.

In corporate news, Norway’s largest bank DNB fell 6 per cent to its lowest level in more than a month after police said they were investigating whether any laws were broken in its handling of payments from an Icelandic fisheries firm to Namibia. DNB has denied wrongdoing. The stock closed at the bottom of the Stoxx 600 index in its busiest day in three years.

Wall Street edged lower on Friday in a post-holiday half-day session amid ongoing trade tensions, while retail stocks dipped on signs of a tepid start to in-store Black Friday sales.

Reports of spot checks on retailers around the US showed fewer people lining up outside stores at the start of Black Friday, suggesting a surge in online buying may have taken the shine off the country’s biggest shopping day.

Shares of Tech Data jumped 12.3 per cent as private equity firm Apollo Global Management raised its bid for the US information technology equipment distributor to about $5.14 billion. – Additional reporting: Reuters.

1 Dublin banker sells island off coast of west Cork for €5.5m
2 Lidl goes to court over Aldi price survey
3 Nigeria seeks more time to fight $9.6bn award to Irish businessmen
4 If tourists are such pariahs should we not be testing them on arrival?
5 Will Revenue come calling with tax bill if inheritance tax threshold falls?
6 Owners of Cork shopping centre sue for €30m after car causes fire
7 Cairn Homes plan for former RTÉ site draws 19 objections
8 ‘I set up an investment club many years ago with a bunch of friends’
9 European shares climb on progress with possible Covid-19 vaccine
10 Majority of employees don’t want to return to pre-Covid working patterns
Real news has value SUBSCRIBE