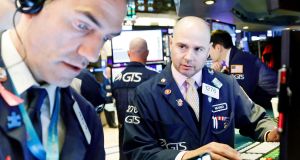 European shares rose for a fifth straight session on Thursday to hit fresh four year highs as investors cheered signs of progress in US-China trade talks and largely positive earnings reports from a host of companies.

Shares of Siemens hit their highest in more than a year after the German industrial company beat fourth-quarter profit expectations, while Italy’s biggest bank UniCredit rose 6 per cent after announcing its first share buyback in more than a decade after solid third-quarter earnings.

Lufthansa jumped 6.8 per cent on plans to cut costs at some of its units to revive profit. The German airline’s shares helped boost the wider travel and leisure index by 1.3 per cent, making it one of the top gainers among the major European sub-sectors. On the trade front, China’s commerce ministry said the world’s two economic giants were working on a deal that would roll back trade tariffs in different stages.

“There are still hurdles to be overcome but it is encouraging that, contrary to last spring, Chinese negotiators are sending more positive signals, as well their US counterparts,” said Raoul Leering, head of international trade analysis at ING.

Kerry Group shares traded flat on Thursday after hitting a record high of €113.90 previously after it was linked to €18 billion takeover of DuPont’s nutrition and bioscience business. Kerry shares have risen 32 per cent this year, making it the top performer in the Euro Stoxx Food and Beverage Index. Rival Glanbia rose by 4 per cent to €10.9.

Another positive day for European financials saw both AIB and Bank of Ireland shares rise 4 per cent and 3 per cent respectively. Permanent TSB was up another 3 per cent after posting positive numbers earlier in the week. Investor appetite for Ryanair was undeterred by news this week that the airline had been forced to ground several Boeing 737s due to cracks between the wing and fuselage but this was not disclosed to the public. Shares in the airline rose 2.5 per cent to €14.09 on the back of a strong session previously.

After weeks of US-China trade talks dominating the limelight in the eyes of the market, the Bank of England finally caught investors’ attention and sent sterling to a two-week low. Markets had expected the bank’s Monetary Policy Committee to vote to keep interest rates at 0.75 per cent, and it did. The exporter-heavy FTSE 100, which is often buoyed by a cheap pound, advanced, albeit cautiously, 0.13 per cent over the day to 7,406.41. Sainsbury’s’ attempts to slash costs by £500 million started in earnest as the supermarket revealed it took a £203 million hit to its balance sheet from a series of store closures.

Rolls-Royce has cut its profit guidance for the year as it continued to be plagued by problems with its troubled Trent 1000 engines. Another famous British engineering name, Aston Martin, tumbled to a £92.3 million pre-tax loss for the past three quarters as sales volumes slid on “tough trading conditions” in the UK and Europe.

Paddy Power owner Flutter Entertainment saw shares rise 1.8 per cent as revenues jumped in the third quarter on the back of improving sales in the US and Australia.

Trade-sensitive Frankfurt shares rose 0.8 per cent to close at their highest level since February 2018. It also helped investors shrug off another weak data point from Germany showing industrial output fell more than expected in September.

The pan-European STOXX 600 index closed up 0.4 per cent. It is now a little over 2 per cent away from its record high hit in April 2015. Among the top gainers across European sub-sectors were automakers and miners, while defensive plays such as telecoms and utilities fell, suggesting higher risk appetite.

The world’s largest steelmaker ArcelorMittal jumped 6.7 per cent on better-than-expected results. Shares in wind turbine maker Vestas rose 11 per cent to the top of the STOXX 600 after it reported forecast-beating quarterly operating profit.

Wall Street’s main indexes hit fresh record highs, as signs of progress in US-China trade relations and a batch of largely upbeat earnings boosted risk appetite. The benchmark S&P 500 index is eyeing its fifth straight week of gains, while the tech-heavy Nasdaq is on track to rise for a sixth week in a row. China said it had agreed with the US to remove tariffs in phases, while state-owned Xinhua News Agency said Beijing was also considering removing restrictions on poultry imports. The technology sector provided the biggest boost to the S&P 500, riding on a 8.3 per cent jump in Qualcomm shares after the chipmaker forecast current-quarter profit above analysts’ estimates. – Additional reporting by Reuters