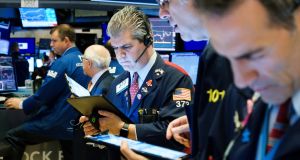 Wall Street on Thursday. US, Europe and London stocks declined on the day due to the prospect of US-China trade deal. Photograph: Justin Lane/EPA

European shares fell on Thursday, hurt by losses for miners and automotive companies as doubts grew over the prospect of a trade deal between the US and China.

This dashed optimism earlier in the session sparked by the US Federal Reserve lowering borrowing costs for the third time this year.

The Iseq index closed down 0.8 per cent, as Glanbia sank. The food group had a weak day on the Dublin market after publishing an earnings update that once again showed disappointing volume trends in its sports nutrition division.

The stock traded down 11 per cent at one point, falling beneath the five-year low set in the summer, before recovering modestly to finish 9.4 per cent lower at €9.99.

Smurfit Kappa traded higher after positive sector news, though at the close the packaging company was down 0.6 per cent at €29.90.

The FTSE 100 index fell 1.1 per cent, underperforming other major European indices, as global trade concerns weighed on stocks and the pound rose, typically a negative for the exporters on the blue-chip index.

Losses in the more domestically focused FTSE 250 were capped at 0.5 per cent.

Royal Dutch Shell posed a drag, with the oil giant closing down 4 per cent after it admitted that its share buy-back plans could be delayed amid challenging market conditions. Rival BP fell 2 per cent.

Lloyds Banking Group edged down 1.4 per cent after saying it was “disappointed” by its third-quarter figures, which included a hefty payout on claims by customers mis-sold payment protection insurance.

Telecoms group BT was among the gainers despite posting flat profits, while airlines group IAG, the parent company of Aer Lingus, advanced 2.2 per cent, despite reiterating its lower outlook for the financial year.

Precious metals miner Fresnillo topped the main board with a near 3 per cent rise, as investors turned to safe haven gold.

The pan-European Stoxx 600 index ended 0.5 per cent lower but logged its second straight monthly gain after an October packed with corporate earnings reports along with some Brexit and trade twists.

In the auto sector, a deal between Fiat Chrysler and Peugeot owner PSA to create the world’s fourth-largest automaker lifted the shares of Fiat Chrysler 8.2 per cent. PSA fell about 13 per cent, after having risen nearly 5 per cent in the last three sessions in the run-up to the deal.

Apple rose 2 per cent after the iPhone maker forecast sales for the holiday shopping quarter ahead of expectations.

Facebook gained 2 per cent after reporting an uptick in users in lucrative markets and its third straight rise in quarterly sales growth.

Estee Lauder fell 4.8 per cent after the cosmetics maker cut its forecast for full-year profit.

Kraft Heinz jumped 13 per cent as the packaged foods company said it was spending more on marketing key brands next year, after reporting a better-than-expected third-quarter profit. – Additional reporting: Reuters.