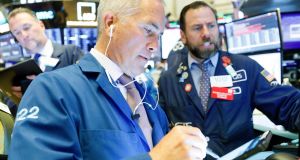 The Nasdaq eked out gains on the back of a rise in shares of Facebook and Microsoft.

Global shares reversed course on Friday after a strong run following comments from US president Donald Trump contradicting reports that the US and China would roll back existing tariffs, adding to concerns on whether the two sides are close to a deal.

AIB was the biggest loser on the index after stockbroker Davy lowered its price target for the stock. The bank dipped 3.95 per cent to €2.87 on the day. Peers Bank of Ireland and Permanent TSB also fell, down 2.06 per cent to €4.47 and 3.25 per cent to €1.13 respectively.

There was little else in the way of market news on the final day of the trading week. Nevertheless, housebuilders Glenveagh and Cairn Homes were also lowers on the day after news on Thursday that housebuilding had stalled in the capital. Cairn fell 1.87 per cent to €1.15 while Glenveagh dropped 0.78 per cent.

On the other end of the Iseq, Glanbia staged a rally, rising 3.01 per cent to €11.30. The stock has been under pressure of late as a result of weakness in its nutrition division. Although up on the day, Glanbia shares are down more than 31 per cent this year.

Falls for mining stocks and a 4 per cent drop in Asia-exposed luxury brand Burberry led London’s FTSE 100 lower on Friday, as doubts about a US-China trade deal halted a five-day winning streak for European markets.

Miners tumbled 2 per cent on their worst day in a month, while Asia-focused financials Prudential and HSBC were also among big drags on the main bourse.

While off the week’s highs, the FTSE still recorded gains of nearly 1 per cent for the five days.

A near 20 per cent surge for Warhammer-owner Games Workshop following upbeat forecasts helped cap losses on the midcap index, which marked its best week in four.

The pan-European STOXX 600 index ended 0.3 per cent lower after gaining 2.5 per cent over the last five sessions.

Bank stocks, slid 1.2 per cent, hit by declines for some of France’s biggest lenders. Shares in Credit Agricole fell 2.3 per cent as quarterly numbers in its corporate centre and retail arms came in below analysts’ expectations.

Richemont slumped 5.7 per cent after the luxury goods group said political protests in Hong Kong weighed on sales growth in the six months to September 30th.

In bright spots, Telecom Italia rose 1.2 per cent after the company said it had made progress in cutting its debt burden.

Italian shares bucked the trend to end 0.1 per cent higher, lifted by shares of Enel which rose after a UBS target price hike. The utility company was awarded all 9,600mw it offered in Italy’s first capacity market auction, the Italian power group said on Friday.

The Nasdaq eked out gains on the back of a rise in shares of Facebook and Microsoft.

Walt Disney gained 4 per cent as its popular theme parks and a remake of The Lion King lifted earnings, and the company also spent less than it had projected on its online streaming service.

Dragging on the Dow were losses in shares of trade-sensitive industrials 3M and Boeing. Among other stocks, Gap fell 6.5 per cent after it said chief executive Art Peck would leave the company, a surprise exit in the middle of a restructuring. The apparel retailer also slashed its full-year earnings forecast.

1 Chris Johns: Economies may enjoy ‘roaring twenties’ if ministers learn lessons
2 Wet pub openings fuelled rise in Irish Covid infection rates – report
3 Basic income for all: Has the Covid crisis given us a new economic model?
4 ‘I don’t need to do any of this. . .I don’t actually need to work.’
5 How long can Government afford to keep State pension age at 66?
6 Direct sea routes to Europe offer certainty in choppy Brexit waters
7 Irish designer of Oxford vaccine: ‘I’ve never worked so hard in my life’
8 Pandemic brings a halt to Zara-owner’s Irish expansion
9 There was no vaccine for Anglo: Why the last crisis was different
10 Topshop owner fights for surivival putting Irish jobs at risk
Real news has value SUBSCRIBE