Markets report: In the UK, M&S drops 4.5% after Tesco says it may open upmarket shop 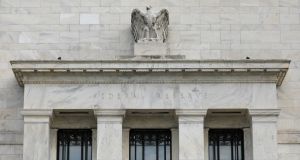 Dublin’s Iseq index and the wider European equities market closed little changed on Wednesday as investors retreated to the sidelines ahead of a policy statement from the US Federal Reserve.

“There is still an element of risk appetite, thanks to the ECB and hopes that the Fed will deliver a rate cut,” said Mike van Dulken, head of research at Accendo Markets. “It might not be imminent but the potential for that before the end of the year is enough for markets to keep holding risk further.”

ECB chief Mario Draghi moved on Tuesday to flag a potential return to bond-buying and lower interest rates if the economy does not improve.

However, housebuilders were under the cosh, with Cairn Homes off 1.8 per cent at €1.19 and Glenveagh Properties down 0.7 per cent at 70 cent.

Ryanair was also out of sorts, declining by 0.9 per cent to €9.91 as analysts at HSBC downgraded its view on industry peers after German airline Lufthansa’s profit warning this month.

Origin Enterprises moved 0.8 per cent higher to €5.38, as the agribusiness group reported robust quarterly figures, which has prompted analysts at Davy to upgrade their full-year forecasts.

The FTSE 100 index dipped 0.5 per cent, weighed down by miners after Rio Tinto cut its forecast for shipments from an Australian region, while sterling’s gains ahead of Bank of England meeting dragged down exporters.

Anglo-Australian miner Rio Tinto fell 4.7 per cent after it lowered its outlook for shipments from a hub in the Pilbara region in Australia due to a higher proportion of certain lower grade products.

Online grocer Ocado fell nearly 6 per cent amid negative sentiment stemming from a media report on stiff competition in the quick delivery industry as Amazon. com tied up with Morrison.

Upmarket food retailer Marks & Spencer dropped 4.5 per cent after Tesco said it was considering a trial of an upmarket convenience store under the “Tesco finest” banner.

British American Tobacco, Unilever and Reckitt Benckiser, which get a chunk of their revenue in US dollars, weakened as the pound rallied before the BoE policy meeting where it might strike a relatively more confident tone than its counterparts.

Clydesdale and Yorkshire Banking Group, however, jumped 6.2 per cent after the lender laid out plans to challenge Britain’s big banks, betting that a re-brand as Virgin Money will help it shake up the market.

Auto stocks advanced on news that China and the United States are rekindling trade talks ahead of the G20 meeting next week.

The resumption in trade talks after a lull also lifted chipmakers, with Germany’s Siltronic recovering nearly 5 per cent after falling sharply on Tuesday.

Meanwhile, Belgian food retailer Colruyt tumbled 15.5 per cent, after the group warned about a deteriorating economic climate in France and Belgium.

Medical technology supplier Carl Zeiss slid 5.5 per cent, after Bank of America Merrill began coverage of its shares with an underperform rating.

Wall Street’s main indexes were treading on water in early afternoon trading, after a rally the previous day, as investors held back from making big bets ahead of the Federal Reserve’s policy statement.

“There is a sense of caution, investors are not willing to take too much risk because there seems to be so much ambiguity on whether there is going to be a rate cut or hike in this meeting,” said Matt Ruffalo, senior strategist at Clarfeld Financial Advisors.