Iseq underperforms European peers but rises almost 0.7% on the day 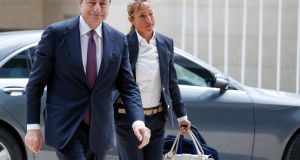 The Irish all-share index rose almost 0.7 per cent yesterday, buoyed by global conditions, although it did underperform its European peers.

Stocks exposed to the US were particular beneficiaries on the day, with Smurfit Kappa rallying 2.08 per cent to €27.03. Index heavyweight CRH also rose 1.56 per cent to €28.65.

Financials were weak, following comments from Mr Draghi, which suggested a cut in interest rates, something that doesn’t spell good news for Irish banks with tracker books. AIB was the big loser on the day, falling 0.73 per cent to €3.56, while rival Bank of Ireland dropped 0.35 per cent to €4.58.

Ryanair continued to suffer as a result of trouble among some of its peers. German legacy carrier Lufthansa issued a profit warning on Monday, causing weakness across the sector. The Irish budget airline fell 1.28 per cent to €10.

Elsewhere, it was a mixed day for house builders, with Glenveagh Properties falling 0.28 per cent to €0.71. The trouble among the stock appears to stem from slowing house-price inflation. Cairn Homes, however rose 0.66 per cent to €1.21. Irish Residential Properties was a good performer, rising 1.79 per cent to €1.71 following a successful €134.2 million share placing carried out by Davy among others.

The Ftse 100 index ended 1.2 per cent higher, having earlier touched levels not seen in two months.

Tool hire company Ashtead was the biggest blue-chip gainer after its 2019 revenue surpassed analysts’ expectations. The stock jumped 6.1 per cent on its best day in more than 2½ years.

Tesco, Britain’s biggest retailer, rose 3.7 per cent after it said it was targeting further margin improvements beyond the end of its current recovery plan.

Drugmaker AstraZeneca added 2.56 per cent after its cancer medicine Lynparza was approved as a first-line maintenance treatment for a type of advanced ovarian cancer by the European Commission.

The pan-European Stoxx 600 index closed 1.8 per cent higher posting its best day in five months. Italy’s FTMIB, France’s Cac-40 and Germany’s Dax climbed more than 2 per cent while most others ended over 1 per cent higher.

German chipmaker Siltronic tumbled 7.8 per cent after issuing its second profit warning in two months, which came hot on the heels of US chipmaker Broadcom’s shock statement last week that trade issues would knock $2 billion off 2019 sales.

Other European chipmakers STMicroelectronics, ASM International and ASML Holding, which were pressured by Siltronic’s results earlier, recovered losses to trade higher, pinning hopes on a positive outcome from the G20 summit.

Wall Street surged and the S&P 500 approached a record high after Washington rekindled trade talks with Beijing, boosting sentiment along with growing investor confidence that the Fed will cut interest rates this year.

US president Donald Trump said he would meet with Chinese president Xi Jinping at the G20 summit later this month, and said talks between the two countries would restart after a recent lull.

The S&P 500 has gained 6 per cent so far this month, and is only about 1 per cent from the all-time high hit in early May.