European stocks up slightly on metal and mining gains 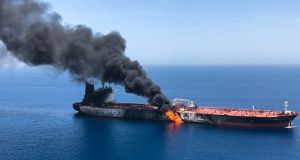 Gains for metal and mining companies helped European stocks to end slightly higher on Thursday, after concerns over an attack on tankers in the Gulf of Oman and continuing US-China trade tensions led to a weak opening.

Oil prices jumped about 2 per cent following the suspected tanker attack, though this surge had faded by the close of markets.

The Iseq index climbed 1 per cent amid positive sentiment as its biggest stock, building materials group CRH, posted a 2.3 per cent climb. The cement-maker closed at €28.58 after rising steadily in the first half of the session.

Bank of Ireland was among the fallers, declining 1.3 per cent to just below €4.64, while Providence Resources declined 6.7 per cent to close under the 10 cent mark.

Britain’s mid-cap index slipped as Boris Johnson emerged as the clear favourite to succeed Theresa May as prime minister.

Stocks on the mid-cap index as well blue-chip financial shares skid after Johnson was backed by more than a third of voting Conservative MPs in the first round of a ballot. This again raised the risk of the UK crashing out of the EU without a deal on October 31st.

The Ftse 250 fell 0.4 per cent, its worst day in more than a week. The Ftse 100 ended roughly flat, with notable gains in plumbing products distributor Ferguson and packaging firm DS Smith, with the latter rising 5.4 per cent.

Ferguson jumped 5.9 per cent after activist fund Trian Fund Management said it had built up a 6 per cent stake.

Despite gains in oil prices, energy giants failed to capitalise, with Shell and BP closing up just 0.3 per cent.

Companies trading ex-dividend were the biggest fallers. House builder Persimmon and ad firm WPP gave up more than 4 per cent.

Tesco recovered from losses earlier in the session to end 0.9 per cent higher after Britain’s biggest retailer flagged slowdown in underlying sales growth in its latest quarter.

The pan-European Stoxx 600 index rose 0.16 per cent. The German Dax outperformed, rising 0.44 per cent, compared with the flat to slightly positive performances of the French Cac 40 and Spanish Ibex, though Italy’s Ftse MIB enjoyed a 0.8 per cent gain.

Volkswagen closed down slightly on a day when it was said to be nearing a deal to co-operate with US giant Ford on electric-car technology and self-driving vehicles.

One of the biggest decliners was copper producer Aurubis, which plunged more than 6 per cent after it warned on profits and said its chief executive would leave the company immediately.

Thales advanced after the French defence electronics group raised its profitability target for 2019 as it factored in the contribution of the recently acquired Gemalto business.

Wall Street equities climbed with European stocks, shrugging off losses in Asia as well as a host of simmering geopolitical tensions. The S&P 500 Index was set to snap a two-day losing streak as a surprise increase in US jobless claims supported the idea of a Federal Reserve rate cut.

The day’s standout move was in oil, with the biggest jump since January after the two tankers were damaged, pushing ExxonMobil and Chevron higher.

10 More than €162m for five retail parks in receivership