Markets await clues from US Fed on policy direction 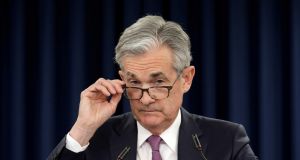 The airline forecast earnings before interest and tax of between €2 billion and €2.4 billion, compared with the previously targeted €2.4 billion to €3 billion, causing its shares to dip.

Meanwhile, markets globally awaited clues from the US Federal Reserve on its policy direction.

The Irish index of shares fell 0.5 per cent over the day to end the session at 6,120.59. The market was dragged lower by weakness in airlines following the Lufthansa profit warning early in the day, with Ryanair down 4.4 per cent to €10.13.

Home builders also suffered, with Glenveagh falling 1.9 per cent to 71 cent and Cairn Homes 1.8 per cent lower at €1.20, with traders indicating last week’s residential property price data that showed the pace of property price growth has slowed to its lowest level since July 2013.

Elsewhere, there was little news to move stocks. Banks were largely flat, with Bank of Ireland ending the day at €4.59 and AIB marginally off at €3.58.

London’s main index inched up on Monday as rises in banking shares outweighed the impact of Lufthansa on airlines, while UK contractor Kier Group skidded to an all-time low. Both the FTSE 100 index and the FTSE 250 midcap index ended 0.2 per cent higher.

The Bank of England meets this week, with little expected but all eyes on central bank policymaking globally after two weeks in which hopes of policy easing have driven a stock market recovery from losses in May.

EasyJet and British Airways owner IAG gave up 4.4 per cent and 2.2 per cent respectively, on the main bourse after Lufthansa cut its 2019 profit outlook. Mid-cap component Wizz Air also dipped 2.6 per cent.

Kier, whose shares have plunged this month due to a report of a discounted sale of its unit and a profit warning, lost another 17.4 per cent, reaching a new all-time low, after the builder suspended dividend, and announced divestment plans and 1,200 job cuts.

Spain’s Indra Sistemas fell after a media report said is to buy up to 75 per cent of ITP Aero from Rolls Royce for about €1 billion.

Wall Street’s main indexes climbed higher on Monday, with the tech-heavy Nasdaq leading the pack, as investors awaited a crucial Federal Reserve meeting that is expected to lay the groundwork for an interest rate cut later this year.

The Fed is likely to leave borrowing costs unchanged at its two-day policy meeting starting Tuesday, but its policy statement will give insight into the impact of trade war, President Donald Trump’s push for rate cut and weaker economic data on the monetary policy.

Markets expect a cut in interest rates as early as July. The S&P 500 index has risen 5 per cent so far this month on this hope, but that rally petered out in the past week.

The Nasdaq Composite index rose after declining 0.5 per cent on Friday as shares of marquee companies such Facebook, Apple, Amazon. com, Microsoft and Alphabet rose between 0.5 per cent and 3 per cent.

Boeing Co gained 2.13 per cent and lifted the Dow higher, after the planemaker raised its rolling 20-year industry forecast for passenger aircraft to $6.8 trillion (€6.05 trillion).

Keeping the gains in check on the blue-chip index was a 3.27 per cent drop in shares of Dow Inc after brokerage BMO Capital Markets downgraded the chemicals maker’s stock to “market perform” on rising macro uncertainty.

Shares of Walt Disney Co dropped 0.59 per cent after a report that Imperial Capital had downgraded the entertainment conglomerate’s shares to “in line”. – Additional reporting: Bloomberg, Reuters

1 ‘No demand... because there are no people’ at well-known Dublin pub
2 Nearly 30,000 could lose pandemic payment if they do not confirm eligibility
3 Dublin-based AR tech company Antikytera secures investment
4 Bank of Ireland does U-turn after refusal to reimburse ‘smishing’ victims
5 UK criticised for ‘unforced errors’ on post-Brexit trade deals
6 HSE says fix for Covid Tracker app rolled out to all Android users
7 Post-Covid television starts to shape up – but with missing pieces
8 ‘Humble’ Airbnb going back to basics
9 MSD buys Takeda biologics plant in Dunboyne
10 Stocktake: Tech stocks more often losers than winners
Real news has value SUBSCRIBE