New rules at London Metal Exchange, where Nigel Farage started out, breaks link with heavy drinking stretching back to its origins in Victorian times 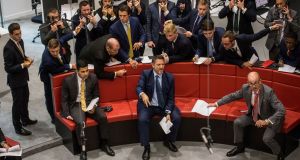 In April, the exchange added rules that would prohibit members from holding sleazy parties at venues such as lapdancing clubs and casinos under a new code of conduct. Photo: Getty Images

The London Metal Exchange is toughening its stance on alcohol consumption with new rules that will prohibit floor traders from drinking during the workday.

In a meeting on Thursday, the LME told its open-outcry dealers that it expects them to apply a zero-tolerance alcohol policy for floor traders, who are responsible for setting global benchmark prices for industrial metals like copper and aluminum. The exchange could impose fines and trading bans for breaches of the rules, they said.

“The LME has broad powers under its rulebook to ensure fit and proper behavior,” the exchange said in a statement.

While the LME already bars dealers from engaging in drunken behaviour on the floor, the policy would go further to break an association with heavy drinking that stretches back to the bourse’s origins in Victorian times.

Nigel Farage, who started his career on the trading floor before making his move into politics, has often recounted details of his booze-fueled exploits during his career in the city, helping to perpetuate the image of the hard-drinking metals trader. Farage now leads the Brexit party, which aims to take the UK out of the EU without waiting to negotiate a deal.

The LME and many member firms have sought to clean up the industry’s reputation. In April, the exchange added rules that would prohibit members from holding sleazy parties at venues such as lapdancing clubs and casinos under a new code of conduct.

The ban follows on from a similar zero-tolerance policy announced by Lloyd’s of London in the wake of reporting by Bloomberg Businessweek that revealed a deep-seated culture of sexual misconduct in the UK capital’s insurance market. Prior to an office move in 2016, the LME was located on the same road as Lloyd’s, and metals traders often frequented the same pubs as Lloyd’s dealers in the city’s historic Leadenhall Market. - Bloomberg