Chips down for investors as markets chafe on Broadcom sales warning

In Dublin, Iseq fell 0.6%, with poor performances from some larger financial stocks 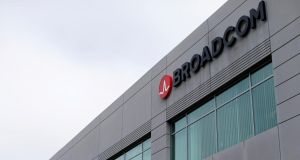 Trade-sensitive technology stocks led losses in European and US markets on Friday after US chipmaker Broadcom’s sales warning and disappointing industrial data out of China came as the clearest sign yet of the damage trade war may do to global growth.

The Iseq fell 0.6 per cent, with poor performances from some of its larger financial stocks. AIB finished the session down 2.6 per cent to €3.58, while insurance group FBD was down 2.5 per cent to €8.46.

Swiss-Irish food group Aryzta’s shares continued their yo-yo performance on the Irish exchange, following its relatively stable results last week and the cutting of outlook forecasts. It closed on Friday down 4.85 per cent to 98 cent, giving up some gains from earlier in the week.

Providence Resources finished up 7.1 per cent to 10 cent per share. Oil company shares generally have risen this week on concerns over attacks on fuel ships in the Persian Gulf.

The Ftse 100 weakened as Asia-focused banks took a hit from underwhelming Chinese industrial growth data. The Ftse slipped 0.3 per cent, with exporter stocks weighing on the index.

HSBC and Prudential were among the biggest drags on the blue-chip index as the data again underlined the knock-on effects of China’s protracted trade dispute with the United States.

The house-building sector slipped 1.2 per cent on its worst day in a month as fears of a chaotic no-deal Brexit had jumped after Brexiteer Boris Johnson moved closer to becoming the next UK prime minister.

Builder Kier, shares in which lost more than a third of their value last week after a profit warning, sank to a record low after a report said the company was preparing to sell its housebuilding business at a discount to cut debt.

Gold, generally viewed as a safer asset in times of geopolitical and economic turmoil, was in demand as worries over a slowdown in global economic growth dominated, helping miner Fresnillo to a 3.4 per cent gain.

The pan-European Stoxx 600 closed down 0.4 per cent, with Frankfurt’s Dax, which lists Europe’s largest chipmaker Infineon, falling 0.6 per cent.

The Broadcom sales warning battered European peers over fears of slowing chip demand. Infineon, AMS and STMicroelectronics, Siltronic and Dialog Semiconductor fell 2.5 per cent-5.5 per cent and pulled the technology sector down 1.8 per cent.

Juventus Football Club shares edged about 4 per cent lower on reports it will pay compensation to Chelsea to seal a transfer of coach Maurizio Sarri. An agreement worth more than £5 million pounds is thought to have been reached.

Mining and auto stocks, which typically fall on trade concerns, fell about 0.9 per cent each. Utilities, among sectors considered as bond proxies, rose 0.5 per cent, helped by shares of National Grid, which was upgraded by brokers.

Shares of Broadcom fell 6.53 per cent after it cut its full-year revenue forecast by $2 billion, blaming the US-China trade conflict and export curbs on Huawei. Shares of Apple also slipped 0.85 per cent and weighed the most on the S&P 500 and the Nasdaq. Broadcom is a major supplier to the iPhone maker.

Losses in chip companies, which both source product from and sell heavily to China, dragged the benchmark S&P 500 index lower, with the Philadelphia Semiconductor index tumbling 2.80 per cent.

The trade-sensitive industrials sector slipped 0.54 per cent, with 3M weighing on the sector. Shares in 3M also added to pressure on the Dow.