Markets report: In Dublin, AIB was the worst performer, ending the session down by 4.1% 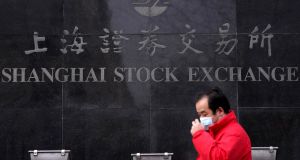 Stocks surged globally on Tuesday and some indices were on pace to unwind losses from last week, as fears of a heavy economic impact from the coronavirus epidemic tapered off after China’s central bank intervened for the second day.

On the downside, AIB was the worst performer, ending the session down by 4.1 per cent to €2.53. The bank announced it had set aside another €300 million to deal with tracker mortgage cases. It had been down as much as 6 per cent in early trading.

FBD fell more than 0.9 per cent to €8.60, as tackling insurance costs remained a hot topic in the election campaign.

The FTSE 100 jumped 1.6 per cent, with the leader board dominated by BP, which rose 4.2 per cent after increasing its dividend, and plumbing parts distributor Ferguson up 7 per cent at a record high. The company announced it had started a new $500 million share buyback scheme and said it was eyeing a switch to a US listing once a planned demerger of its UK business is complete.

Shares of Glencore jumped 5.2 per cent as the miner maintained its 2020 production targets. NMC Health ended 3.3 per cent lower despite it reassuring investors that its trading for 2019 was in line with expectations. It had climbed as much as 9 per cent earlier in the day.

A prominent FTSE 250 gainer was transport company FirstGroup, which jumped 6 per cent after property investor Robert Tchenguiz raised his stake. IT company Micro Focus tanked 22.3 per cent to a near six-year low and underperformed the midcaps after reporting lower annual results.

European shares clocked their biggest one-day gain in nearly four months on Tuesday. The Cac 40 in Paris and the Dax 30 in Frankfurt both closed 1.8 per cent higher.

In line with the pick up in global stocks, the pan-European Stoxx 600 index finished up 1.6 per cent, building on Monday’s gains after virus fears knocked 3 per cent off the index last week.

Broad-based gains in Europe were led by a 3.5 per cent jump in the basic resources sector. Topping the pan-regional index was Danish medical equipment manufacturer Ambu which soared 24 per cent after reporting better-than-expected quarterly revenue.

But a clutch of poor earnings kept a lid on gains. Italian carmaker Ferrari slipped 2.3 per cent despite meeting profit targets as it provided only a cautious upgrade to its outlook for 2020.

Also languishing at the bottom of the Stoxx 600 index was Swiss inspections group SGS, logging its worst day in more than 3½ years after the company’s second-biggest investor, the von Finck family, cut its stake.

Technology stocks, which are typically sensitive to growth related concerns in China, led the charge with their 2.5 per cent gain. The China-focused Philadelphia SE semiconductor index climbed 2.8 per cent.

The fourth-quarter earnings season is half done and nearly 70 per cent of companies that have reported so far have surpassed earnings estimates. Ralph Lauren jumped 9.1 per cent after the retailer’s holiday-quarter profit beat market expectations.

Health insurer Centene slipped about 1.5 per cent, weighed down by a surge in quarterly medical costs. – Additional reporting: Bloomberg/Reuters/PA