Currency has dropped 1.5% over past two trading days, and has flirted around the $1.30 mark 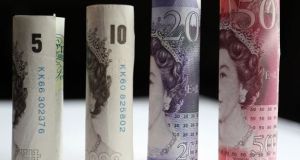 Sterling was around €1.17 on Tuesday, and failed to recover fully from its previous day’s drubbing

The British pound rebounded through a key level yet was still the worst-performing major currency since the UK left the EU at the end of January.

The currency has dropped 1.5 per cent over the past two trading days, returning to its level before Boris Johnson’s Conservatives won a resounding victory in the December 12th general election. Tuesday’s move makes it by far the worst performer this month on Bloomberg’s world index of major currencies.

“The market is too long and the underlying trade concerns are real,” said Kit Juckes, a strategist at Société Générale. “If we see the pound against the euro near 90p or against the dollar at $1.28 or below it will be in the next few weeks or months. Better news for the currency grows slowly over a longer timeframe.”

The UK construction purchasing managers’ index rose to an eight-month high of 48.4 in January from a month earlier, easing the persistent decline in activity as client demand and business optimism improved. Tuesday’s IHS Markit/Cips figure was higher than economists’ expectations in a Reuters poll.

A reading below 50 indicates a majority of businesses reporting falling output compared with the previous month.

Meanwhile, Britain’s public finances face a £12 billion deficit by 2022-23 instead of the £5 billion-surplus laid out in the Conservative’s election manifesto, according to Financial Times calculations.

Brussels and London set out on Monday their visions of the future relationship, with Michel Barnier, the EU’s chief Brexit negotiator, making it clear that access to the bloc’s market would come with tough conditions attached, particularly in terms of Britain’s adherence to EU rules.

Mr Johnson insisted there was “no need for a free trade agreement to involve accepting EU rules on competition policy, subsidies, social protection, the environment, or anything similar any more than the EU should be obliged to accept UK rules”. – Copyright The Financial Times Limited 2020