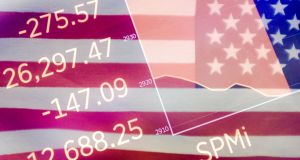 News that UK prime minister Boris Johnson could end the Brexit deadlock by agreeing to a customs border in the Irish Sea boosted shares on Tuesday afternoon.

AIB surged almost 8.5 per cent as the banks led a rally on the news that Mr Johnson was close to a Border climbdown that could lead to a Brexit deal. The bank closed 8.41 per cent ahead at €3.35 after the news broke.

Brokers noted that the banks were biggest beneficiaries of the positive Brexit headlines. AIB peer Bank of Ireland rose 6.59 per cent to €4.43. Permanent TSB added 1.33 per cent to close at €1.216.

“It was one of those Brexit days,” said one dealer. “The markets took a big move up on the headlines in the afternoon.”

Ryanair gained 1.79 per cent to €12.215 as the news had a generally positive effect on airlines. Multinational packaging manufacturer Smurfit Kappa climbed 3.94 per cent to €29.52.

It as also a good day for insulation and building materials maker Kingspan, which rose 2.46 per cent to €47.44. Index heavyweight and global cement giant CRH moved 1.6 per cent ahead to €31.68.

News that life sciences investor Malin Corporation was caught in the liquidation of British investment fund, Woodford, failed to dent its shares, which inched up 0.47 per cent to €4.30.

“There wasn’t a whole lot of red on the screen as the day changed,” one dealer said. “More or less all the market got a lift from Brexit headlines, we will have another few twists and turns before the week is out.”

Woodies DIY owner and builders’ merchant Grafton advanced 5.36 per cent to 855 pence sterling as the positive Brexit news emerged. The Irish group has a large British business and is listed on the London Stock Exchange.

Recruiter Hays jumped 8.1 per cent to 155.4p after it reported steady first-quarter net fees due to strong hiring in the United States and China.

British banks considered most vulnerable to Brexit uncertainty all gained ground. Lloyds rose 5.24 per cent to 60.82p, Royal Bank of Scotland was up 5.07 per cent at 226.1p and Barclays increased 5.07 per cent to 226.1p.

Shares in Wirecard slumped 12.8 per cent to €122.05 after the Financial Times published documents on the company’s accounting practices alleging an effort to inflate sales and profits, dealers said.

The pan European STOXX 600 index still managed to add 1.1per cent, with other major regional indices including Germany’s DAX and France’s CAC 40 gaining a similar amount. Europe’s bank index rose 2.5 per cent, leading gains among the major sectors, while retailers gained 2.4 per cent.

Wall Street rose 1 per cent as strong earnings from JPMorgan, UnitedHealth and Johnson & Johnson allayed fears about the fallout from a prolonged US-China trade war. The Dow was up 0.9 per cent to 27,024.80 by close of business.

Blackrock, the world’s biggest asset manager and an investor in the Republic, rose 2.7 per cent after its quarterly profit beat estimates.

Roku surged 9.3 per cent after the television streaming platform said Apple’s TV app was available on its platform and Apple TV+ would be available after it was launched. – Additional reporting, Reuteurs