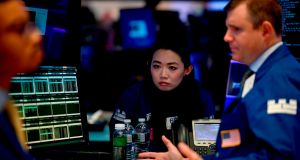 US equity futures dipped after China appeared to pour cold water on a partial trade deal touted by President Donald Trump, saying it wanted to iron out details before signing it.

Stocks in Europe dropped alongside US equity futures after China appeared to pour cold water on a partial trade deal touted by President Donald Trump, saying it wanted to iron out details before signing it.

Meanwhile, hopes of a deal between Britain and the European Union faltered as both parties said over the weekend that much more work would be needed to secure a Brexit agreement.

The lack of news on a potential Brexit deal put the market in a holding pattern, with volumes down and traders noting a quieter-than-usual session.

Traders had expected the market to pull back a bit following the gains made on Friday, but although there was some weakness during the day’s trading, things improved a little as the day went on.

Ryanair also held the majority of last week’s gains, finishing the session at €12, 0.04 per cent lower than Friday.

Elsewhere, food stocks showed some gains, although volumes remained weak. Kerry rose 1.5 per cent over the day to finish at €106.60, while Glanbia finished 1.16 per cent higher at €11.30. Total Produce gained more than 3 per cent to close at €1.43.

London-listed companies with exposure to the domestic economy retreated on Monday as last week’s euphoric optimism gave way to doubts over whether a timely Brexit deal could be clinched, while cybersecurity firm Sophos surged 36 per cent after a buyout offer.

The FTSE 250 ended slightly off the day’s lows but still shed 0.6 per cent, handing back part of the more than 4 per cent gain it had recorded in the previous session which was its best in nearly a decade.

Blue-chip banks such as Lloyds and Barclays and housebuilders skidded, dragging the FTSE 100 0.5 per cent lower.

The main index was also hurt by a drop in miners after disappointing imports and exports data from top metals consumer China.

Ad firm WPP, which lost 4 per cent in the previous session after French rival Publicis cut its sales view for the second time, ended 2.8 per cent higher. Royal Mail slipped 2.4 per cent after a report that the company was facing the threat of an employee strike over Christmas.

A three-day rally in European shares came to a halt on Monday. The pan-European Stoxx 600 index closed down 0.5 per cent, but erased nearly half of losses made earlier in the session as defensive sectors gained some favour and carmakers rose.

Mining stocks, among the chief barometers of concern over the Chinese economy, shed 2.5 per cent , leading declines among the European subsector trading in the red.

Bank stocks were the biggest drag on the Stoxx 600, down 0.8 per cent, as euro-zone bond yields fell due to investors pouring into the safety of fixed income.

Carmakers edged 0.3 per cent higher, extending gains for a fourth session, while sectors considered stable during times of economic uncertainties such as real estate, utilities and food and beverage cut early losses. Among individual movers, Swiss pharmaceutical companies Roche Holding AG and Novartis AG dropped 0.4 per cent and 0.8 per cent, respectively, after a report that the US was considering tariffs on Swiss pharmaceutical products.

US stocks stalled on Monday after three straight sessions of gains as a bare-bones trade deal with China announced on Friday dampened sentiment and triggered a 2 per cent drop in oil prices, ahead of the start of third-quarter earnings season.

Oil majors Exxon Mobil and Chevron were among the biggest drags on the S&P 500 index, as oil prices gave up last week’s gains on growing concerns that the partial trade deal could take time to be sealed.

But the absence of details left investors feeling less upbeat about what had really been achieved. Shares of companies with a sizeable exposure to China, including Nvidia Corp, Advanced Micro Devices Inc and Micron Technology Inc, slipped after gaining on Friday. The Philadelphia Semiconductor index fell 0.3 per cent.