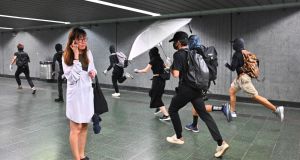 Masked protesters run past at Diamond Hill station in the Kowloon district of Hong Kong. Photograph: Philip Fong/AFP via Getty

Hong Kong Exchanges and Clearing abruptly dropped its £29.6 billion unsolicited takeover bid for London Stock Exchange Group after opposition from the UK company and a cool reception from Beijing.

HKEX’s board, which met over a public holiday on Monday after a weekend of violence, was concerned by the lack of engagement from the LSE, weeks after it initially approached the company, people familiar with the matter said.

The proposal didn’t get support in China, where the official People’s Daily pointed to “persistent worries” about Hong Kong given the current unrest, and instead promoted LSE’s existing tie-up with the Shanghai Stock Exchange. HKEX declined to comment.

The decision is a rare setback for HKEX chief executive Charles Li, who saw London at the centre of trading between eastern and western markets. The withdrawal now leaves LSE, which viewed the HKEX bid as an unwelcome distraction, free to pursue its $27 billion takeover of Refinitiv.

It will take the 300-year-old bourse further away from a traditional exchange model and deeper into big data. – Bloomberg