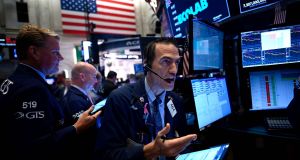 Ryanair shares soared more than 5 per cent after a bullish report on aviation shares from analysts at New York stockbroker Redburn had investors queuing for take off. The Irish carrier climbed 5.17 per cent to close at €10.885 on Monday, hitting a high of €10.93.

Lenders were also popular. Bank of Ireland succeeded in raising €300 million by selling bonds. The financial institution closed 2.17 per cent up at €3.67. Rival AIB added 1.8 per cent to close at €2.60.

Insulation and building materials group Kingspan dipped 0.7 per cent after it emerged that the company was buying part of British rival SIG for £37.5 million sterling. The UK group’s shares fell on the back of a profit warning.

Fertiliser, animal feed and farm services group Origin Enterprises slid 4.1 per cent to €4.70. Dealers said that volumes were small and that “there was not a whole lot” behind the move.

Ingredients and convenience food specialist Kerry Group rose 1.4 per cent to €108.30 on a day when defensive stocks were popular.

Global cement and building materials group CRH dipped 0.7 per cent to €29.73. The stock had traded up earlier in the session.

A note from stockbroker Davy on the industry recommended that investors stick with the Irish giant and Italian rival Buzzi.

Builder’s merchant SIG plc plunged more than 20 per cent to a 52-week low of 87.6 pence sterling in early trade after warning that profits would suffer in the face of falling construction in the UK and deteriorating conditions there and in Germany. The British company also announced that it was selling part of its business to Irish group, Kingspan.

Its stock ended the day 15.9 per cent down at 100.5p. SIG’s warning dragged down its entire sector, including Irish player, Grafton, which is listed in London. The Dublin-headquartered DIY and builders’ supplier fell 4.26 per cent to 707.5p. Rival Howden Joinery slid 3.06 per cent to 538p.

Builder Travis Perkins ended the day 2.12 per cent down at 1,224.5p while Kingfisher dipped 0.52 per cent to 191.3p. Brexit uncertainty has slowed building and infrastructure investment in the UK over the last three years.

Aer Lingus owner International Consolidated Airlines’ Group gained 3.06 per cent to 468.6 as investors flocked to the sector on the back of analysts’ recommendations.

Italian cement maker and CRH rival, Buzzi rose 1.41 per cent to close at €20.11. The company and its Irish peer were the two singled out by analysts with Dublin brokers Davy.

German chemical giant Bayer added 1.36 per cent to €63.13 after announcing that a US lawsuit against it had been delayed.

In the same sector, BASF rose 1.3 per cent. The firm said it would invest €20 million in Quantafeul, which makes fuel from plastic waste.

French video game maker Ubisoft dropped 5.5 per cent to the bottom of Stoxx 600 on weak reviews of its newly launched game, Ghost Recon.

The pan-European Stoxx 600 index closed up 0.7 percent after tumbling 3 per cent last week.

US stocks cut losses on Monday after comments from White House economic adviser Larry Kudlow calmed nerves over the outcome of scheduled high-level trade talks with China later in the week.