Ryanair was Iseq’s big mover, jumping 5.5 per cent on the day 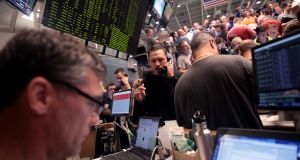 German shares logged their best day in six weeks on Wednesday, leading the charge among European shares, as sentiment was lifted by signs of progress in US-China trade relations a day ahead of high-level talks between the two parties.

Reports that China was still open to agreeing to a partial trade deal with the United States, and that Beijing was offering to increase its annual purchases of US agricultural products, came as signs of compromise, but analysts remain sceptical. “At first glance, recent news provides at least some reason to be a bit more optimistic about the US-China trade talks,” wrote Raoul Leering, head of international trade analysis at ING in a note. “But there’s scant evidence that the two sides are willing to change their positions enough to break out of the current deadlock.”

Ryanair was the Iseq’s big mover, rising 5.5 per cent to €11.32 after falling in the previous session on the back of a weaker growth outlook from rival Easyjet. The pick-up came amid a general bounce for trade-reliant and transport sectors linked to easing trade tensions. Property group Hibernia Reit fell 2 per cent amid a budget clampdown on tax exemptions for property vehicles.

Swiss-Irish food group Aryzta rose nearly 2 per cent after a 5 per cent plunge in the previous session, triggered by the company’s full-year earnings, which involved another 1.5 per cent fall in revenue.

The company has being trying to refocus on its core frozen bakery business following a sequence of setbacks and ill-advised acquisitions. Bank of Ireland rose 1.1 per cent amid a general uplift in financials across Europe but AIB lost ground with shares shedding nearly 2 per cent.

British shares lagged global markets on Wednesday as fears of damage from Brexit outweighed reports of China being open to a partial trade deal with the United States. The FTSE 100, whose components make two-thirds of their earnings abroad, added 0.3 per cent but trailed Wall Street and European markets as blue-chip housebuilders and retailers fell. The FTSE 250 index, which has a greater domestic exposure, ended 0.2 per cent lower. Supermarket chains Sainsbury’s and Tesco lost 2.2 per cent and 1.1 per cent, respectively, while homebuilder Persimmon lost nearly 2 per cent as a crucial deadline in the long-drawn out Brexit process looms.

Prime minister Boris Johnson has repeatedly said that Britain will leave the European Union on October 31st with or without a deal, leaving markets braced for a Brexit showdown. Among the gainers, London Stock Exchange Group (LSE) added 3.2 per cent to top the FTSE 100 leader-board, recouping some of the steep losses seen in the last session when Hong Kong Clearing and Exchange abandoned takeover plans. Just Eat climbed 1 per cent after orders at its Dutch rival Takeaway. com surged.

Exporter-heavy German shares added 1 per cent and the pan-European Stoxx 600 index rose 0.4 per cent recovering from Tuesday’s 1 per cent decline when hostility from both sides in the US-China dispute dented sentiment. Trade-reliant sectors such as technology stocks, auto and part makers and some luxury goods stocks were among the biggest boosts to the index.

Airbus lost 0.3 per cent after sources said the planemaker’s defence and space unit issued an internal warning of significant challenges in meeting cash flow and other targets for 2019.

Wall Street rose on Wednesday on the back of gains in technology stocks, as investor sentiment was boosted by reports indicating an ease in trade tensions between the United States and China ahead of pivotal talks on Thursday. China was still open to agreeing to a partial trade deal with the United States, despite the inclusion of top Chinese artificial intelligence startups in a trade blacklist, according to a Bloomberg report.

Johnson & Johnson’s shares fell 2.2 per cent after a jury awarded $8 billion in punitive damages to a man who accused it of failing to warn that young men using its antipsychotic drug Risperdal could grow breasts.

Shares in Microsoft and Apple rose about 1 per cent and were among the biggest boosts to the S&P 500 . The technology sector rose 1.08 per cent. Chipmakers with a sizable exposure to China also gained, with the Philadelphia Semiconductor index up 1.45 per cent. “The reality of what we can actually expect from these talks is for both sides to come to a truce. If they just called a time-out, a detente, then the markets would celebrate that,” said Art Hogan, chief market strategist at National Securities in New York.