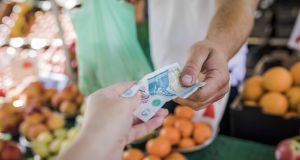 Sterling soared on Friday, rising 1.6 per cent against the euro to reach 86.95p, before falling back to 87.22p. Photograph: Jennifer West/Bloomberg

Dublin- and London-listed shares, along with sterling, took off on Friday after optimism over a possible Brexit deal took hold among investors. The Iseq, considered by many as a barometer of Brexit sentiment, finished the day almost 4 per cent stronger, with banks and property companies leading the charge. In London meanwhile, the same sectors lifted the FTSE higher, with five companies on the FTSE 100 posting double-digit percentage growth. Analysts pointed out that the index does not normally react strongly to Brexit news as most companies focus on international business. The FTSE 250, which is a better gauge of Brexit breakthroughs, closed 4.19 per cent higher.

The boost came on Thursday’s news that Taoiseach Leo Varadkar and UK prime minister Boris Johnson believed they had found a “pathway” towards a Brexit deal, with an acceptance at EU level that substantive talks could now commence reinforcing this.

Sterling also soared, rising 1.6 per cent against the euro to reach 86.95p, before falling back a touch to trade around 87.22p. Against the dollar, sterling hit 80.49p, climbing almost 2 per cent on the day.

“Pound traders are growing in confidence that a no-deal Brexit will be avoided in three weeks’ time,” said Fiona Cincotta, an analyst at City Index.

“We didn’t have enormous short sterling positions on, but we have certainly been unwinding them,” he said. “The market is moving from concern about no-deal to belief that there will be some kind of deal.”

Markets are also looking forward to a meeting between US president Donald Trump and Chinese vice premier Liu He.

“Dealers are optimistic as [Mr] Trump tweeted that ‘good things are happening’ at the trade talks,” said David Madden, an analyst at CMC Markets. He added: “Dealers have been taking their cues from the US president, so hopes are running high.” – PA/Copyright The Financial Times Limited