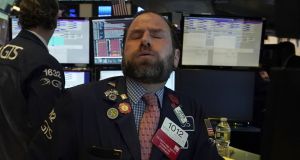 A trader on the floor of the New York Stock Exchange. Photograph: Timothy A Clary/AFP via Getty

Banking stocks stood out as the worst performers on the Iseq on Monday as stocks globally plunged amid concerns over the spread of the coronavirus and a 30 per cent slump in the price of oil amid a stand-off between Russia and Saudi Arabia over output.

Following the US Federal Reserve’s move last week to announce its first emergency rate cut since the 2008 financial crisis, financial markets are beginning to price in US rates falling to a record zero per cent in the coming months to stave off a recession in the world’s largest economy.

European Central Bank president Christine Lagarde will preside over the first scheduled monetary policy meeting by a major central bank on Thursday, with the institution’s response to the spread of the virus set to come under intense scrutiny.

Deutsche Bank economists see the ECB cutting its deposit rate by 0.1 percentage point to minus 0.6 per cent.

Bank of Ireland lost 15.7 per cent to €2.60, AIB declined by 14.1 per cent and Permanent TSB plummeted 12.4 per cent as sector followers fretted about the outlook for the economy and declining interest rates, which will squeeze lending margins and income levels.

Dalata Hotel Group slumped almost 9.8 per cent to €3.30 as the company warned that it had been hit by significant reductions in bookings and increases in cancellations since the spread of Covid-19 to Europe. Sentiment was further dented as the Government moved to cancel all St Patrick’s Day parades in the State.

Oil explorer Providence Resources slid 25.4 per cent to 2 cents as oil prices fell at their fastest rate since the 1991 Gulf War as Saudi Arabia teetered on the brink of an all-out price war after Moscow refused to sign up to an accord to cut production to rescue the coronavirus-battered oil market.

Tullow Oil ended the session down 32 per cent at 16p, having fallen as much as 57 during the session to lows not seen since 1991.

“Stock markets have plummeted today as continued fears about the coronavirus, combined with the fresh worries of a price war in the oil market, has battered sentiment,” CMC Markets analyst David Madden said.

“Dealers are terrified that more swathes of Europe will go into quarantine, and that has been a factor in the brutal sell-off in stocks ... There are serious concerns that some economies could slow down or even get pushed into a recession,” he added.

Norwegian stocks exposed to crude oil plummeted 9.4 per cent, their worst day in more than 30 years.

Italy’s blue-chip index shed 11.2 per cent, underperforming its regional peers for the day after the government ordered a virtual lockdown across much of its wealthy north in a drastic attempt to try to contain Europe’s worst outbreak of the virus.

Trading was halted immediately after the opening as the S&P 500 tumbled 7 per cent, triggering an automatic 15-minute cut-out originally put in place to avoid a repeat of the Black Monday crash of 1987, when the Dow slumped nearly 23 per cent.

The S&P 500, Nasdaq and Dow Jones rallied off their lows soon after trading recommenced, but remained down about5 per cent in early afternoon trading.

Companies listed on the S&P 500 have now lost more than $5 trillion in value in a sell-off sparked by fears that the coronavirus epidemic could tip the global economy into recession.