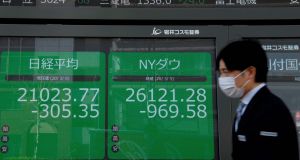 Shares plummeted across Europe as the number of coronavirus cases worldwide topped 100,000, fuelling a further sell-off of equities.

The pan-European Stoxx 600 closed 3.7 per cent down, to its weakest point since mid-August 2019, ending red for the third straight week after global coronavirus cases continued to rise.

The Iseq finished down 2.8 per cent. Ryanair closed up 0.8 per cent at €11.345, but dealers noted that this was a 7 per cent intra-day swing as airlines staged a relative recovery.

The closure of Flybe and decisions by leading carriers such as Ryanair to cut flights have reassured investors that air fares may suffer less than expected earlier this week, dealers explained. Falling oil prices also helped prop up airlines’ share prices.

AIB retreated 4.63 per cent to €1.812 as the lender reported that pre-tax profits fell 60 per cent to €499 million. Low interest rates squeezed profits from lending, the bank said.

Traders said that investors fear that deeper rate cuts designed to shore up the world economy against the coronavirus impact would hit the lender’s profits further. The same concerns sent Bank of Ireland shares tumbling 2.22 per cent to €3.08.

Building materials giant CRH shed 4.3 per cent to close at €30.46. Investors also went off food stocks, normally a safe bet in times of market upset. Ingredient specialist Kerry fell 3.4 per cent to €116.5, while Glanbia, processor of Avonmore Milk, dropped 1.84 per cent to €10.69.

Cruise operator Carnival’s shares sank 7.1 per cent to 1.981.5 pence, their lowest in eight years, as one of its vessels, Grand Princess, was left in the doldrums off San Francisco after coronavirus was detected on board.

Norwegian Air Shuttle shed almost a quarter of its value as analysts predicted that the Scandinavian carrier would have to tap investors for cash for the fourth time in two years.

Shares in the airline fell more than 25 per cent on Friday before recovering marginally to close 22.78 per cent down at 12.24 Norwegian kroner. Analysts estimate that it could lose €250 million in the first three months of this year.

However, aircraft-maker Airbus dived 7.6 per cent as it failed to win any new aircraft orders in February – further evidence of disruption across aviation industries due to the spread of coronavirus.

US stock markets tumbled on Friday as fears of economic damage intensified with the global tally of coronavirus cases crossing 100,000, sending investors scurrying to the perceived safety of bonds.

The Dow Jones Industrials shed more than 500 points, and the S&P 500 fell for the tenth time in the past 12 sessions.

Starbucks slipped 1.5 per cent after signalling a business hit due to fewer customers at its Chinese stores, while Costco Wholesale fell 2.2 per cent as it said it was struggling to keep up with demand for essentials, including disinfectants. – Additional reporting: Reuters

1 Should I switch bank now with Ulster Bank at risk of closing?
2 Air travel never going ‘back to way it was’
3 Will brother’s widow get half of our parents’ estate when they die?
4 Household wealth jumps by 74% since last recession – report
5 Tourism and aviation players demand von der Leyen end EU travel chaos
6 Irish insurers in focus as UK cracks down on dual pricing
7 Data privacy advocate submits further evidence in Google ads inquiry
8 Majority of submissions favour changing law on forestry licence appeals
9 Pallet manufacturer looks to imports as timber crisis takes root
10 House insurance: save yourself money by reviewing your policy
Real news has value SUBSCRIBE