S&P ahead by 2% in early trade, Iseq also higher 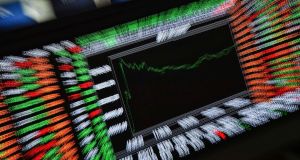 Trading in futures linked to the federal funds rate indicates that investors are now betting the Federal Reserve’s policy committee will make another cut at its scheduled meeting later this month. Photograph: AFP via Getty

US and European stock markets rose on Wednesday as investors anticipated more policy responses to the threat of coronavirus and cheered Joe Biden’s strong showing in the US Democratic primaries.

The S&P 500 gained 2 per cent in morning trading, retracing some of its losses of Tuesday. European markets rose through the session leaving the Stoxx 600, an index of the region’s largest companies, up 1.6 per cent. London’s FTSE 100 rose 1.5 per cent, while the Iseq was ahead by close to 0.5 per cent..

The yield on the US 10-year Treasury note was at 0.986 per cent after nudging above 1 per cent earlier in the morning in New York.

The gains for US stocks on Wednesday come after one of the most dramatic periods of trading on Wall Street since the financial crisis. On Tuesday stocks sold off after the Federal Reserve’s shock decision to cut interest rates by half a percentage point, after posting one of the best days in the last decade on Monday. Last week saw heavy selling due to fears of the spread of the coronavirus.

The Fed’s interest rate cut is part of a wave of central bank support to alleviate some of the worst effects of the coronavirus. Tuesday’s decision is its first emergency intervention since the peak of the financial crisis.

Pimco’s US economist Tiffany Wilding said that while rate cuts are an imperfect instrument when dealing with a global health emergency, “they can contribute to an environment where easy financial conditions buffer the economic shock, as opposed to exacerbate it.”

Trading in futures linked to the federal funds rate indicates that investors are now betting the central bank’s policy committee will make another cut at its scheduled meeting later this month.

“The Fed is likely to cut again, but how soon remains the question,” said Esty Dwek, head of global market strategy at Natixis Investment Managers. She added that other central banks “are likely to follow suit, even if their firepower is more limited.”

Results on “Super Tuesday” in the US – the biggest primary results day for Democratic presidential contenders – pointed to a solid performance by Joe Biden and a disappointing result for Bernie Sanders, a candidate seen by many investors as overtly hostile to markets.

“The one-two punch thrown on Tuesday by the big Fed rate cut and the Biden win last night has put a floor under the stock market for now,” said Chris Rupkey, chief financial economist at MUFG Union Bank. “The coronavirus market sell-off looks to be stabilising.”

In the US, healthcare stocks led the market in early trading. The sector gaining 3.6 per cent, an indication the market had reduced the chances of a win for Mr Sanders, who has made a single-payer national health insurance programme a core part of his campaign. – Copyright The Financial Times Limited 2020