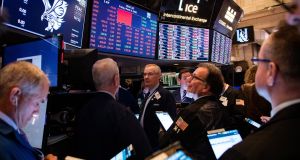 US stocks dropped on Friday, despite a strong US jobs report, extending the S&P 500’s losses for the week to nearly 4 per cent in early New York trading. Photograph: Jeenah Moon/ New York Times

Stocks across the globe tumbled on Friday on fears of cascading economic disruption caused by the spread of the coronavirus, while bond prices hit historic highs.

The pan-European Stoxx 600 closed 3.7 per cent lower, with British, German, French, Spanish and Italian stocks all in the red, while the mood on Wall Street was also negative throughout the session.

In Dublin, the Iseq finished 2.8 per cent lower, as AIB sank 4.6 per cent, cement-maker CRH lost 4.3 per cent and even food group Kerry, often seen as a safe bet along with other food stocks in times of market turbulence, falling 3.4 per cent.

The Stoxx 600 index, which tracks the region’s leading companies, saw its third consecutive week of declines. It is now down almost 12 per cent since the start of the year as concerns rise about the health of companies’ balance sheets, as well as their earnings.

US stocks dropped on Friday, despite strong jobs data, with the S&P 500 down more than 2 per cent in early afternoon trading in New York.

With haven assets in high demand and traders raising their bets on the US Federal Reserve cutting interest rates again, the yield on US 10-year government debt briefly fell below a record low of 0.7 per cent. Yields had stood at 1.9 per cent at the start of this year.

Yields on the US 10-year have tumbled by more than 0.3 percentage points in each of the past two weeks, the biggest such moves since the height of the 2008-09 financial crisis.

The sharp slide has stunned investors, reflecting “pure fear” in the market, according to one fund manger. Bond yields fall when prices rise.

Meanwhile, oil prices plunged after Opec failed to reach a deal for deeper production cuts, while gold was heading for its biggest weekly gain since 2016 as investors looked for safe places to store their cash.

“There has been a morphing of this crisis from earnings downgrades due to Covid-19 impacts to the potential for it to be a credit crisis,” said Alan Custis, head of UK equities at Lazard Asset Management.

The cost of insuring against the default of some of Europe’s biggest corporate borrowers had “blown out” over the past couple of days, and “investors are now treating companies with leverage with a lot of caution”, he added.

The Stoxx index tracking European bank shares fell on Friday to its lowest level since the financial crisis as the expectation of lower interest rates amplified concerns over lenders’ profitability.

Some analysts advised keeping cool heads. “Don’t give in to panic,” said Alain Bokobza, a strategist at Société Générale.

7 Meath site zoned for residential and retail guiding at €2.5m

10 Irish biotech Amarin gears up for drug launch in Europe