Markets braced for another roiling week as virus cases multiply 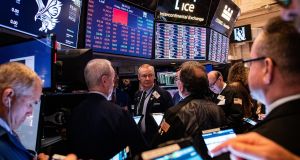 Stocks in the Middle East nosedived on Sunday after the world’s biggest crude producers failed to agree on production cuts at last week’s talks in Vienna.

Investors are facing another turbulent week on the markets as tumbling oil prices adds to coronavirus-fuelled nervousness.

Stocks in the Middle East nosedived on Sunday after the world’s biggest crude producers failed to agree on production cuts at last week’s talks in Vienna, kicking off a price war and sending Brent down almost 10 per cent on Friday.

The prospect of competing price-cuts by the biggest crude producers and the looming economic slowdown are stoking anxiety in a world already on edge over the spread of the Covid-19 outbreak. As of Sunday, about half of the world’s countries have reported cases of the virus according to the World Health Organisation. The global death count outside of China headed toward 500.

“This is a very nasty shock to an already stressed market,” said Stephen Innes, the Bangkok-based chief market strategist at Axicorp.

“Compounding the Covid-19 no endgame in sight narrative with probable value-at-risk implosion triggered by the fall in oil prices should give global investors a case of the cold sweats, while keeping them awake at night for the foreseeable future.”

The dollar was poised to extend a sell-off that saw it slip on six of the past seven trading days as investors look to the Federal Reserve to add further stimulus in an effort to stave off the fallout from the epidemic. US 10-year bond yields fell to all-time lows last week, with the 10-year yield dropping as far as 0.66 per cent, as investors piled into havens.

In Europe, investors will brace for declines in Italy after the government sought to lock down the north of the country to contain the coronavirus. Northern Italy has been the epicentre of the outbreak in Europe with almost 6,000 cases. “There are signs of stress in almost every corner of financial markets,” a team led by Guy Stear, head of fixed-income research at Societe Generale SA, wrote in a report.

“Nobody knows how the Covid-19 situation will evolve, but what is obvious is that it is a significant growth shock and the longer it sticks around, the risks of a full-blown crisis will grow.” - Additional reporting by Bloomberg