Coronavirus wipes €6.7bn off value of shares in Dublin 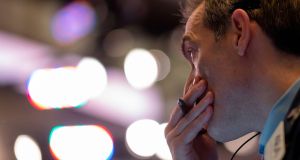 The start of trading on the New York Stock Exchange on Thursday. Wall Street stocks opened sharply lower, joining a sell-off in most global bourses as the coronavirus spreads. Photograph: Getty Images

Overall the pension funds, life policies and other savings tied to the main index of shares traded on the Irish market have lost €8 billion since the beginning of the year.

In London the leading Ftse 100 index had haemorrhaged £152 billion (€178bn) since the beginning of the week by Thursday.

Dealers in Dublin said that virtually every stock retreated as investors deserted shares. “There’s a lot of red on the screen,” said one shortly after business closed.

Investors fear the chances of a coronavirus pandemic are growing as the number of cases continues to increase.

US stocks fell more than 4 per cent on Thursday, extending a sell-off to its sixth day and closing in correction territory as pressure grew on the Federal Reserve and other central banks to cut rates in response to the coronavirus.

The S&P 500 suffered its worst day since August 2011, ending at its low for the day down 4.4 per cent. That marked a 12 per cent decline since a peak last week – more than the 10 per cent fall that traders define as a correction.

The Stoxx 600 index of European shares had earlier dropped 3.8 per cent, leaving European markets set for their worst week since the euro zone sovereign debt crisis in 2011. London’s FTSE 100 fell 3.5 per cent.

“We’re in panic mode,” said Jim Paulsen, chief investment strategist of the Leuthold Group. “This isn’t just a temporary pullback where people are wondering whether to buy the dip, this is people not wanting to touch this.”

Reports on Thursday said that more 2,800 people had died from the condition, while globally 80,000 were infected. Italy, where the virus has claimed 17 lives, has quarantined 11 towns.

A sustained epidemic could hit global economic growth and the profits earned by companies listed on the world’s stock exchanges.

Airlines and tourism-related stocks were amongst the hardest hit as they will be in the firing line if countries curb travel in an effort to halt the virus’s spread.

The pan-European Stoxx 600 index, which retreated 3.8 per cent for the day, has fallen more than 10 per cent from a record high hit on February 19th.

Pension advisers Mercer warned in a paper released on Thursday that stocks could fall further if the coronavirus spreads to become a pandemic and efforts to control it hit economic activity.

The company said that it still expected the world economy to grow this year, particularly in the second half.

However, Mercer noted that there was considerable uncertainty around this, and said the situation could worsen “should this become a prolonged global pandemic, with many lockdowns and quarantines emerging across the world”.