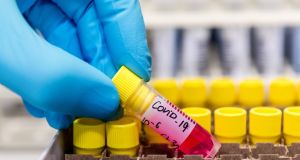 The single method to bring much of the coronavirus uncertainty to an end would be the discovery of an effective vaccine. Photograph: Geert Vanden Wijngaert

Financial markets are in a panic. By some measures, global stock markets have averaged losses of about a trillion dollars a day over the past week, with the fastest equity market correction in the US since the Great Depression; it’s been the worst period for stocks since the financial crisis.

Interest rate expectations have shifted to predicting further falls and bond yields have fallen. A key US long-term term interest rate fell to an all-time low. Oil prices have collapsed, gold prices are up and “‘fear indices” (yes, these exist) have also risen.

Given the news flow about coronavirus, it is not terribly surprising that markets have swooned. Stock and bond markets are driven by many things but they are mostly devices for guessing about the future.

Markets react quite rationally to events that make forecasting even more perilous than usual.

Markets can also be irrational. Sometimes price movements cannot be traced to anything real. An industry of market commentators spend much of their lives making up stories about price moves that, in reality, cannot be explained. Human psychology provides a partial answer to the puzzle of otherwise inexplicable market volatility.

All of these forces have combined to produce the dramatic market moves seen in recent days.

While falls in equity prices look understandable, one or two commentators have questioned the logic behind the scale of the fall. For losses of these magnitudes to be rational, either the near-term hit to growth is going to have to be very large indeed or long-term growth will have to be permanently lower than it would otherwise have been. Both of these are possible but, based on what we know, look to be low probability outcomes. I’ll come back to that short-term outlook.

Nobody, not least this columnist, knows what will happen next. Experts have put wide bands on what a coronavirus pandemic would look like. The Economist quoted estimates of the disease affecting 25 per cent to 70 per cent of the world’s population should an uncontrolled pandemic occur. Working out the economic consequences of that human tragedy is next to impossible.

That uncertainty is, nevertheless, possibly not enough to explain the extent of market falls. Martin Sandbu, the FT’s respected economics commentator, suggested that one of the very few ways growth could be permanently lower is if coronavirus itself becomes a permanent feature of the disease landscape, something that most medical experts seem not to expect. Sandbu is one of those analysts who think the market falls are probably overdone.

There may be a more prosaic explanation. It is possible that equity prices had become detached from all those fundamental drivers and had become another bubble.

In such circumstances, any catalyst could be responsible for a market collapse: prices just fall to where they should have been anyway. US stocks, at the time of writing at least, are only back to where they were six months ago. That they have fallen so far could be just, in part at least, a reflection of an unjustified surge.

Coronavirus implies both a demand and supply shock. Consumers who don’t travel or go out much at all will reduce their spending. Companies will tend to hoard their cash rather than invest it.

In such circumstances, monetary and fiscal authorities should take up the slack. Interest rates should be cut and governments should turn on the spending taps. But there isn’t much room for monetary manoeuvre so it will fall to governments to relax borrowing limits. It’s important that they do so but far from obvious that they will – or do so in time.

That’s all about the demand side of the equation. But we are also experiencing a supply shock. All those just-in-time, tight global supply chains are being disrupted, most obviously in technology but also across many other industries, not least clothing. When schools close, workers have to stay at home: another problem for companies.

Governments can do less about supply problems. One possible surprising economic consequences of all of this could be that monetary and fiscal expansion meets private sector supply contraction to produce a most unexpected bout of inflation. That, I think, should be the least of our worries.

Other than hard data suggesting the virus is waning, perhaps the single headline that could bring much of the uncertainty to an end would be the discovery of an effective vaccine. Until such a development, it seems the uncertainty will persist and probably grow. Warmer weather could help, according to some experts, but that leaves open the possibility of a return of the virus next autumn or winter.

Economic growth will be lower than it otherwise would have been. Some countries could fall into recession. Japan and Germany look particularly exposed. Economic policy is, perhaps, of second-order importance to the medical response but both are critical. Fiscal and monetary authorities need to act now.