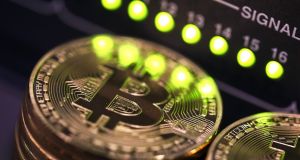 Bitcoin is already off to a bad start for 2018. Photographer: Chris Ratcliffe/Bloomberg

Bitcoin is already having a bad year. For the first time since 2015, the cryptocurrency began a new year by tumbling, extending its slide from a record $19,511 reached on December 18th.

The virtual coin traded at $13,624.56 as of 5 pm. in New York on Monday, down 4.8 percent from Friday, according to data compiled by Bloomberg. That’s also a fall from the $14,156 it hit Sunday, according to coinmarketcap.com, which tracks daily prices.

The cryptocurrency fluctuated in early Asian trading on Tuesday. Bitcoin got off to a much stronger start last year, and then kept that momentum going, helping to create a global frenzy for cryptocurrencies. It rose 3.6 per cent on the first day of 2017 to $998, data from coinmarketcap.com show. It ended the year up more than 1,300 percent.

That rally drew a growing number of competitors and last month brought bitcoin to Wall Street in the form of futures contracts. It reached the December 18th peak hours after CME Group’ debuted its derivatives agreements, which some traders said would encourage short position-taking. - Bloomberg