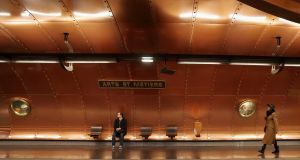 Commuters wait on a platform at the metro station Arts et Metiers, which is covered with copper panels, in Paris. Photograph: Gonzalo Fuentes/Reuters

Copper prices continued their march higher on Thursday, rallying to their highest level in almost four years and putting the metal on track for its best year since 2010, in a welcome development for some of the world’s largest mining companies following years of oversupply.

The metal is set to end the year up more than 30 per cent, helped by strong global economic growth and robust demand in China, the world’s biggest consumer.

Copper has become a favourite metal for global mining companies such as Glencore and Rio Tinto, and a lack of supply is forecast by the end of the decade as old mines come to the end of their lives and are not replaced.

Demand for the metal is also expected to increase from a buildout of charging networks required for electric cars and integration of renewable energy from the wind and sun.

Copper staged a spectacular rally to more than $10,000 a ton in early 2011 after China launched a huge stimulus package following the financial crisis. It then crashed to just over $4,000 a ton in early 2016, as new copper projects came to fruition and demand weakened, causing analysts to forecast a “wall of supply”.

This year, however, copper prices have clawed their way back up to more than $7,000 a ton. On Thursday they hit $7,312 a ton, the highest level since January 2014. – Copyright The Financial Times Limited 2017