Dollar heads for worst year since 2003 as ‘Trump Effect’ fades 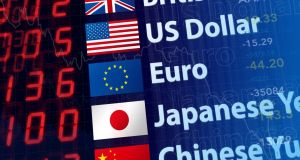 The dollar slipped to its lowest in more than three months against a basket of major currencies on Friday as the euro and sterling climbed, putting the greenback on track for its worst showing since 2003.

The dollar started 2017 on a high, with the index that tracks it against a basket of six major currencies hitting its strongest in 14 years on hopes that new US president Donald Trump would implement pro-growth, pro-inflation measures.

But it has fallen back on doubts about Mr Trump’s ability to push through those policies. And it has also lost out as growth has picked up outside the United States, with other countries’ central banks moving towards tighter monetary policy, lessening the gap between the Federal Reserve and others.

“We are seeing synchronised global growth, in particular a very strong growth recovery in the euro area, which is leading the ECB (European Central Bank) to gradually normalise policy, which is helping the euro,” said Societe Generale currency strategist Alvin Tan.

Mr Tan added that the dollar had become overvalued against the euro, yen and sterling at the start of the year and so another part of the reason for its weakness in 2017 was a mean reversion in valuation.

The common currency showed little immediate reaction to Italy’s announcement that it will hold an election on March 4th, as such an outcome had been anticipated.

Although sterling is still more than 10 per cent down against the dollar since the June 2016 vote for Britain to leave the European Union, it has climbed 9.5 per cent in 2017 - its strongest year since 2009.

On Friday sterling climbed half a per cent to a three-week high of $1.3511.

Shin Kadota, senior strategist at Barclays in Tokyo, said rebalancing of positions by market participants signaled broad selling of the dollar, particularly the yen, towards the year’s end.

“Seasonal trends in the currency market have shown that the dollar tends to weaken after Christmas through the first few days of the following year before eventually being bought back again,” he said.

Many institutional investors close their books at the year-end, a deadline for taxation and performance reporting, a time seen leading to dollar selling pressure.

Hotel takes case against insurer Zurich over failure to pay for Covid disruption 16:44
Law firm Ashurst opens Dublin office due to Brexit 16:22
Number of Boeing 737 Max jets back in service tops 100 16:12
Sharp rebound in US jobs figures as Covid cases declined 16:10
Volkswagen aims for electric cars to make up 70% of sales in Europe by 2030 15:58