All quiet in Dublin and Europe as hurricanes batter US markets

US stocks hold firm in choppy trading; Equifax down 15% after major hacking 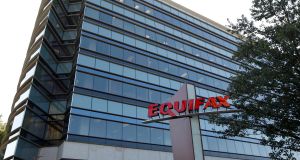 Equifax weighed the most on the S&P, after the provider of consumer credit scores said personal details of as many as 143 million US consumers were hacked. Photograph: Tami Chappell/Reuters 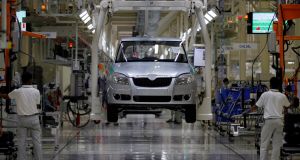 Volkswagen was up 0.5 per cent after reports it was actively working on deals to sell non-core assets accounting for as much as 20 per cent of the German carmaker’s annual revenues

Although European shares were little changed on Friday on the whole, the UK’s top share index was under pressure from mining stocks. Ireland traded slightly upwards despite very low volumes, while US trading was mixed as investors assess the likely outcome of Hurricane Irma.

It was a quiet end to the week in Dublin trade which saw the Iseq close up by 0.34 per cent.

One of the more heavily traded stocks on Friday was Cairn Homes, which ended up closing down by 1.12 per cent at €1.765. Dublin brokers said the drop was a result of profit-taking after the company reported a solid set of interim results earlier in the week.

Cairn was joined near the bottom of the Iseq by Permanent TSB, which also fell by 1.12 per cent. AIB also traded off slightly, by 0.18 per cent.

As the newsflow surrounding Ireland’s housing industry continues, Green REIT was Friday’s beneficiary, nudging up by 0.33 per cent to €1.50.

Ryanair was another heavily traded stock and ended down by 0.19 per cent. The share price has moved around this week following an announcement on Wednesday about the airline’s new bag policy.

A decline in the copper price weighed on the FTSE’s miners, with Antofagasta, BHP Billiton and Anglo American all down more than 3 per cent.

Shares in mid-cap brewer Greene King slumped more than 15 per cent to a five-year low after it reported a fall in sales at its pubs, warning of tougher times ahead.

The FTSE 100 ended a week dominated by a European Central Bank meeting with a loss of 0.8 per cent. Banks, however, were among the top gainers on Friday after the central bank indicated it was preparing to scale back its stimulus programme.

Burberry rose 0.5 per cent on the back of a positive note from Credit Suisse, whose analysts raised the luxury goods group to “outperform”, highlighting it as one of their top turnaround picks.

Another big faller was France’s Hermès International whose shares fell 2.6 per cent. The luxury group had been expected to join the CAC 40 index but STMicroelectronics , up 0.6 per cent, was admitted instead.

Akzo Nobel lost 0.6 per cent after it issued a profit warning and announced a revamp that will include the chief financial officer stepping aside and a shake-up to its paints and industrial coatings businesses.

In the automotive sector, Volkswagen was up 0.5 per cent after reports it was actively working on deals to sell non-core assets accounting for as much as 20 per cent of the German carmaker’s annual revenues.

US stocks were mixed in choppy late morning trading on Friday as investors assessed the financial impact of Hurricane Harvey and tracked Hurricane Irma as it ploughed toward Florida.

The Dow Jones Industrial Average was higher, helped by a rebound in financial stocks, while the Nasdaq Composite edged lower, dragged down by Apple and Comcast. The S&P 500 was little changed.

The indexes, however, were on track to end the week lower, with many economists forecasting that third-quarter GDP will take a blow from the hurricanes. Irma was set to hit Florida as early as Saturday, with the Federal Emergency Management Agency warning that parts of Florida could be out of electricity for days, if not longer.

Equifax sank more than 15 per cent, weighing the most on the S&P, after the provider of consumer credit scores said personal details of as many as 143 million US consumers were hacked.